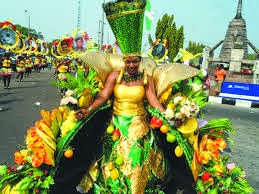 The Calabar Carnival other wise referred to as ‘Africa’s Biggest Street Party’ came into been in 2004 via the visionary leadership of the former governor, Mr Donald Duke. he thought of making Cross River  State the hub of tourism and hospitality. it was also believed that this would improve on the socio-economic fortunes of the State.
The events that characterises this grand party comprises the Carnival Calabar Queen Pageant , Essay Competition, Cultural Parade, Children’s Carnival and Kings and Queen.
There are five bands that participate in the street party and they include” Bay Side Band, Masta Blasta Band, Passion-4 Band and Seagull Band.
The theme for the 2014 edition is “Celebration Time”. It may interest you to know that the celebration of Africa’s Biggest party has gone into its’s 10th edition. It’s been a decade of joyful galore reason why its ‘Celebration Time’!