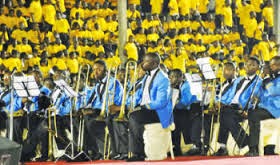 A Nigerian based choir- Akwa Ibom has broken the world record of largest number of Christmas carol singers in the world.The group called the Unity Choir held a concert in Uyo Township stadium on December 13 with Guiness record personalities in attendance.

The choir had in attendance 25 275 members which surpassed the former record of 15 675  carol singer set by a group called CENTI in Bogota in Colombia on December 13.

the performance lasted for 20 minutes.