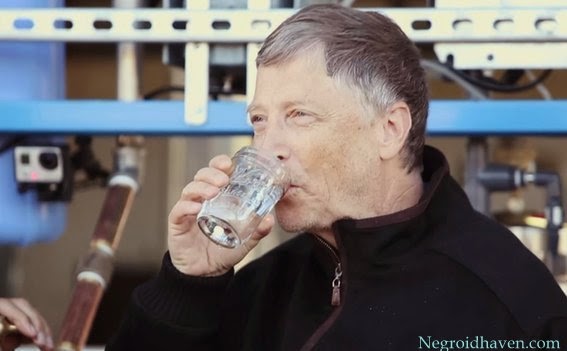 Bill Gates has drunk a glass of water distilled from human faeces, to showcase an advanced technology that could provide clean water to the developing world.

The Microsoft founder, Mr Gates said he wanted to begin sending processing plants around the world after tests later this year.

The project was welcomed by WaterAid, which said that it could particularly be of aid to most urban areas in critical economic conditions,

According to the charity, some 748 million people worldwide lack clean drinking water.

In a video posted on his blog, Mr Gates watched as the human waste was fed into the processor, before drinking the end product from a glass.

‘Sewer sludge’
“The water tasted as good as any I’ve had out of a bottle. And having studied the engineering behind it, I would happily drink it every day. It’s that safe,” he wrote in the blogpost.
In the video, the developer of the Omniprocessor system, Peter Janicki, says the raw “sewer sludge” is first boiled, during which process the water vapour is separated from the solids.
Those solids are then put into a fire, producing steam that drives an engine producing electricity for the system’s processor and for the local community.
The water is put through a cleaning system to produce drinking water.
“Why would anyone want to turn waste into drinking water and electricity?” Mr Gate asked.
The answer, he wrote, was because “diseases caused by poor hygiene conditions kills an average of 700,000 children every year, and they others, contribute to diverse growth adnomalities”.
He added: “If we can develop safe, affordable ways to get rid of human waste, we can prevent many of those deaths and help more children in critical economic situations grow up healthy.”

UCTH: Group highlights more than sixteen achievements spearheaded by the management, board of tertiary medical facility