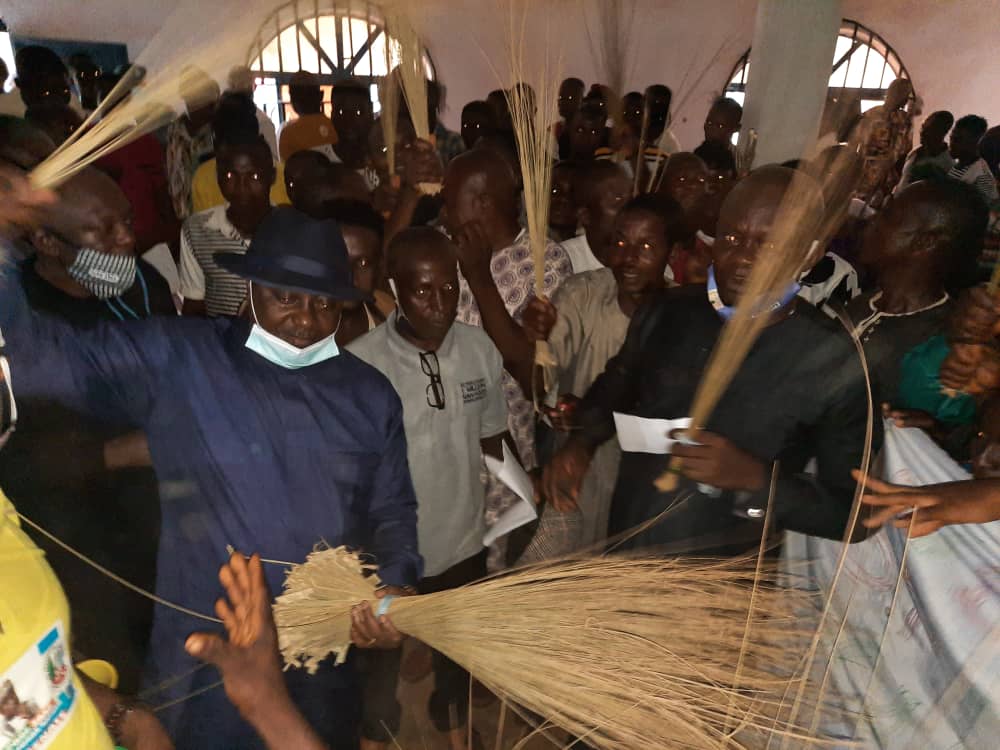 Our Correspondent, 16 June 2020
The Senatorial ambition of Prof. Zana Akpagu got another big boost over the weekend as over five thousand (5,000) members of the People's Democratic Party, PDP yesterday defected from the party to the All Progressives Congress, APC in Obudu local government area.
Prof. Akpagu who hails from Obudu, the same local government with Governor Ben Ayade is a frontline aspirant for the Cross River Northern Senatorial district bye-election under APC.
The academic who's the incumbent Vice Chancellor of the University of Calabar was in his home town yesterday for a small consultative meeting but on hearing that he was around, a mammoth crowd consisting of PDP members and numbering over 5000 came out to pledge their allegiance to him and his party, the APC.
Speaking, the popular APC stalwart assured members that the days of intimation by the PDP government in the state was over as APC will deploy its federal might to protect its members in the local government and state in general.
He said that he was in the race as a Cross River North indigene who is very concerned about the maladministration and failed representation the zone has suffered over the years under the PDP.
He thanked the defectors for taking the bold decision not minding that the Governor was from the local government even as he assured them that they have made the right decision to be part of  movement that will end the incessant cry of poor representation.
"I want to thank you for this love. Today, you've made one of the best political decisions and I want to assure you that we'll not fail you. Obudu and Cross River belong to all of us; the days of victimisation by the PDP government for being in opposition is over. We're the government in power and we'll deploy our federal might to ensure our members are protected from the desperate PDP".
He added that “APC  under the leadership of the National Chairman, Adams Oshiomole, President Muhammadu Buhari and Asiwaju Bola Tinubu will be basking in a euphoria of victory in the forthcoming Senatorial bye-election. From today, you have been formally inducted into the APC family and everybody will be treated equally".
On his part, the Ward Chairman of Alege-Uban who received the defectors said that their decision to dump the umbrella for the broom was timely as the APC in the state needs a visionary Senator at the Senate to support the strides achieved by President Muhammadu Buhari.
In his words, “Alege-Ubang is very important in Obudu local government because of its strong political base and agrarian nature. I believe that receiving members of the PDP from that locality will make the senatorial bye-election easy for us.”
Speaking on behalf of the defectors, Charles Akeh said that their decision to join the ruling APC is to strengthen the party in the area and work for Prof Zana Akpagu in the forthcoming bye-election.
He said that “We will ensure that APC wins in Alege-Ubang during the senatorial bye-election. We'll build on Prof. Akpagu's unmatched achievements and popularity to deliver APC".
An APC leader,  Hon. Reuben Okang, while addressing press men said that “We had issues at Alege during the Presidential and National Assembly elections of 2019 where those who worked for APC were sent on exile but we are happy now that we have an aspirant like Zana who has always shown capacity in salvaging our sorrows in the region".

UCTH: Group highlights more than sixteen achievements spearheaded by the management, board of tertiary medical facility