NEGROID HAVENTruth in view of Africa\'s Liberty!
More
Home Breaking News Strike Day 3: We will dialogue with no one else except Ayade...
Facebook
Twitter
Pinterest
WhatsApp 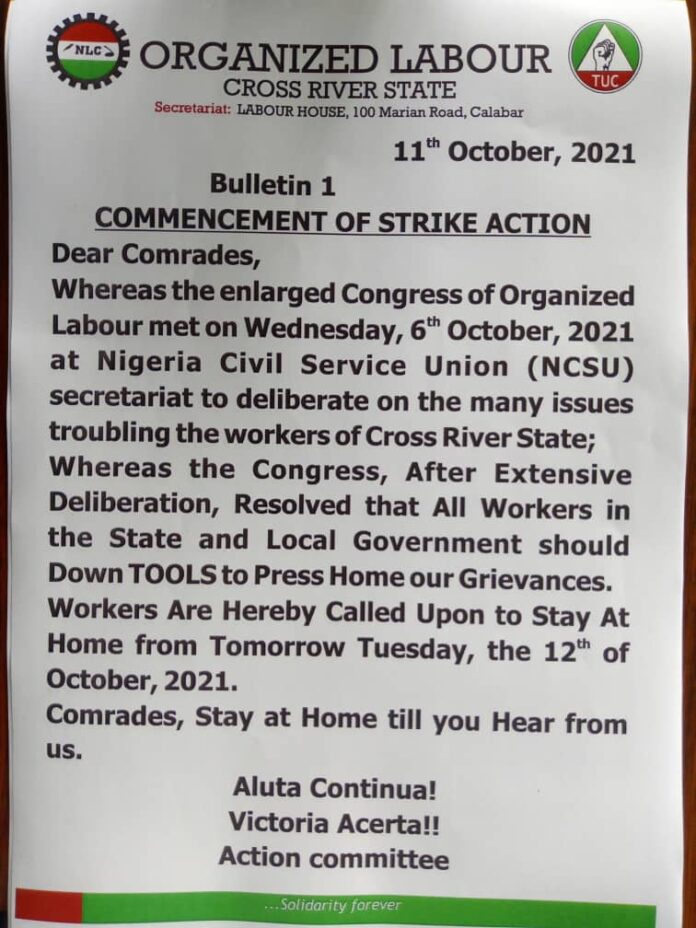 Organised Labour in Cross River State has disclosed that it would not dialogue or negotiate with anyone else except governor Ben Ayade as it concerns their 14 point demands to the government.

This is coming on the heels of government faulting of the industrial action by Labour in the state claiming that it met their demands and there were no pending issues.

It was gathered that the Cross River state government faulted organised labour’s insistence on industrial action despite meeting their demands.

The Deputy Governor of the state, Professor Ivara Esu who spoke at a scheduled meeting with labour leaders, which they failed to show up, decried their belligerent posture, wondering why they failed to keep to their part of the agreement with government.

The Deputy Governor also condemned labour’s failure to turn up for the meeting and their resort to locking up government offices.

“We called those who signed this document to come for a meeting with us. Not necessarily for negotiations but at least let us hear who they represent,

“Though organised labour is not known to law in terms of issues between employer and employee, they signed this document and we invited them for a meeting and we have been waiting here not even one of them has shown up”, the evidently upset Esu said.

“I must say the practice of locking government offices and preventing people who want to work in having access is unacceptable,” he lamented.

As the industrial action entered day three labour said that the current administration has been the most financially favoured since inception of democracy since 1999.

They stated that governor Ayade has been blessed to receive different refunds and bailouts yet he never considered the retirees.

Speaking exclusively with Vanguard, Chairman of Trade Union Congress, Comrade Monday Ogbodum said there were willing to dialogue with government only on the condition that the governor will be present at the meeting adding that the Deputy Governor, Prof Ivara Esu does not always have the mandate of the number one citizen of the state and they will not meet with him.

“Most of the things the deputy Governor does never gets the endorsement or mandate of the governor, so what is the essence of meeting with him, we will meet with only the governor.

“Our retirees are dying daily like flies as if what they are demanding for is a privilege, the gratuity is their right they have earned it, they deserve it, funny enough, the Ayade administration is the most favoured administration financially since 1999, yet our retirees can’t benefit.

“Why did our governor fail to pay the retirees with bailout funds from Federal government, why did he fail to consider our workers when he received Paris Club refund 1, 2, 3, our retirees are dying yet politicians are busy globetrotting despite lean resources, government should do the needful,” he said.