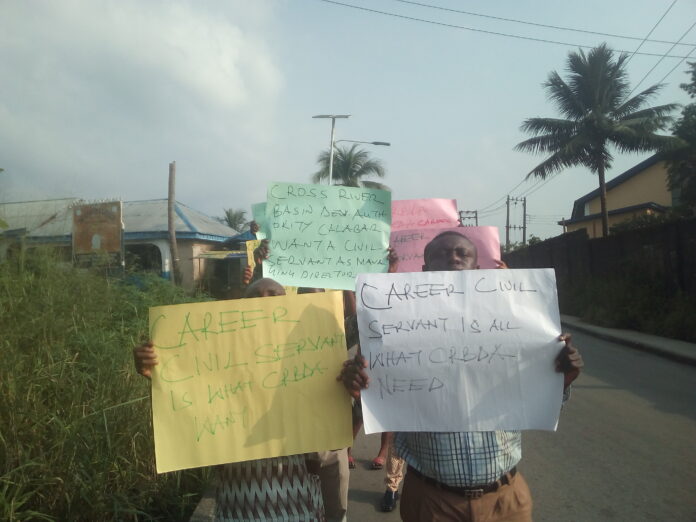 CALABAR – Staff of Cross River Basin Development Authority, CRBDA, on Friday morning undertook a peaceful protest to demand for the appointment of a technocrat to head the management of the Authority and not a politician NEGROIDHAVEN can say.

The protest which held under the aegis of, Nigerian Union of Agricultural and Allied Workers Union, saw the workers marching round the premises of the Authority located at Ikot Eneobong, while carrying placards with inscriptions like, “CRBDA needs a career civil servant”, “Politicians do not understand the vision of CRBDA”, “Hon Minister, please do not allow CRBDA to die” and so forth.

The union Chairman, Comrade Jospeph Etim who spoke with our reporter said the intention of the workers is not to fight or dictate to the Federal Government what to do but since they are the ones who run the Authority day-to-day, they are well placed to know what will bring about effective management of the place.

Etim stated that the workers are appealing to the Federal Government and the Honourable Minister of Water Resources Alhaji Suleiman Adamu to assess the state of the Cross River Basin Authority before making another appointment so that the place will not die completely.

“We the workers are making a passionate appeal to the Minister of Water Resources, who personally flagged off a farm at the Basin Authority last year to come and see the state of the farm. No crop was planted in that farm and the place is completely covered with weeds. We know that if it was a civil servant who is at the helm of affairs in this place he would have the fear of losing his job or messing up his career so please, let him consider our appeal”.

The workers who came out in their numbers said the CRBDA has many irrigation projects situated across the two states of Cross River and Akwa Ibom which the Authority covers but none is functional.

“There are irrigation projects in Obubra/Wakande, Ogoja, Ijegwu/Yala, Obudu and the CRBDA took over the Cross River Songhai Farm at Itigidi and thousands of cassava stems were heaped there but none was planted and the place is now a grassland. We certainly cannot continue like this except we want the place to die completely”. Etim stated

According to the workers, if properly managed the CRBDA has the capacity to produce food to feed south- south states and even for export and called for a proper appraisal of the state of affairs in the authority before a new management is appointment.

Mr Jackson Udo, the Public Relations Officer said the Executive Director is a civil servant and cannot speak to the press.