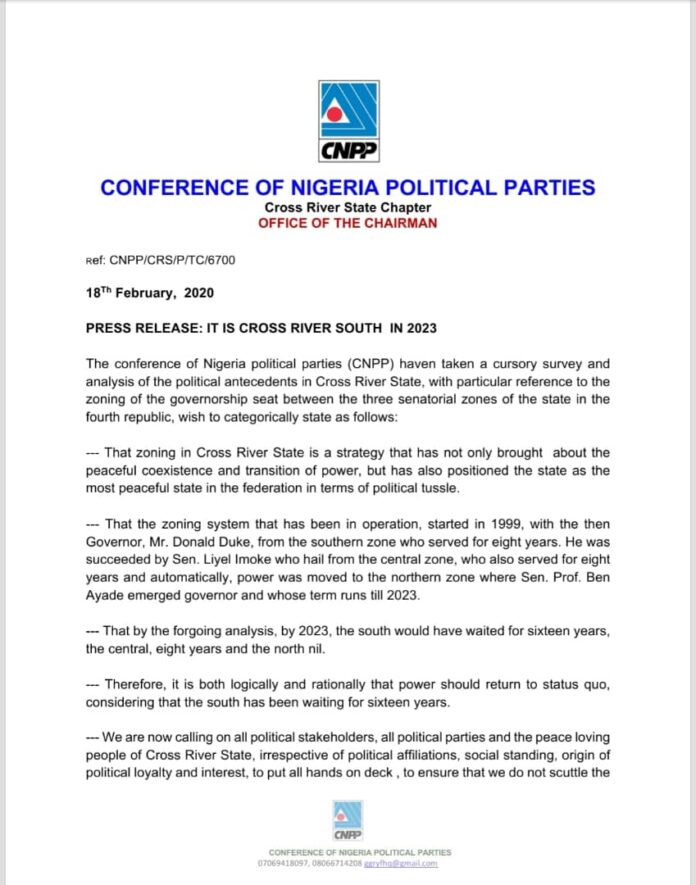 In a press release made available to NEGROIDHAVEN, political parties under the aegis of Conference of Nigeria Political Parties (CNPP), have zoned the high office of governor in Cross River to the southern senatorial district on some grounds principal amongst which is peaceful coexistence. They called for the support of the incumbent governor of the state, Ben Ayade, till 2023.

What follows is the excerpt of the release.

The Conference of Nigeria Political Parties (CNPP), haven taken a cursory survey and analysis of the political antecedents in Cross River State, with particular reference to the zoning of the governorship seat between the three senatorial zones of the state in the fourth republic, wish to categorically state as follows:
–That zoning in Cross River State is a strategy that has not only brought about the peaceful co-existence and transition of power, but has also positioned the state as the most peaceful state in the federation in terms of political tussel.

–That the zoning system that has been in operation, started in 1999, with the then governor, Mr. Donald Duke, from the southern zone who served for eight years. He was succeeded by Sen. Liyel Imoke who hails from the central zone, who also served for eight years and automatically, power was moved to the northern zone where Sen. Prof. Ben Ayade emerged governor, and whose term runs till 2023.
–That by the forgoing analysis, by 2023, the south would have waited for sixteen years, the central, eight years and the north nil.
–Therefore, it is both logically and rationally that power should return to status quo, considering that the south has been waiting for sixteen years.
–We are now calling on all political stakeholders, all political parties and the peace loving people of Cross River State, irrespective of political affiliations, social standing, origin of political loyalty and interest, to put all hands on deck, to ensure that we do not scuttle the peace we enjoyed in the state over the years, by allowing the south to produce the next governor come 2023.
–More so, we call on all detractors to desist from their ill actions and negative vibes that may distract the government of the day and overheat the polity with the unnecessary call for the abolition of the zoning system.

Consequently, the Conference of Nigeria Political Parties (CNPP) appeals to the general public to join hands, in support of governor Ben Ayade’s-led administration to deliver on its mandate to the people for a better Cross River State and Nigeria at large.