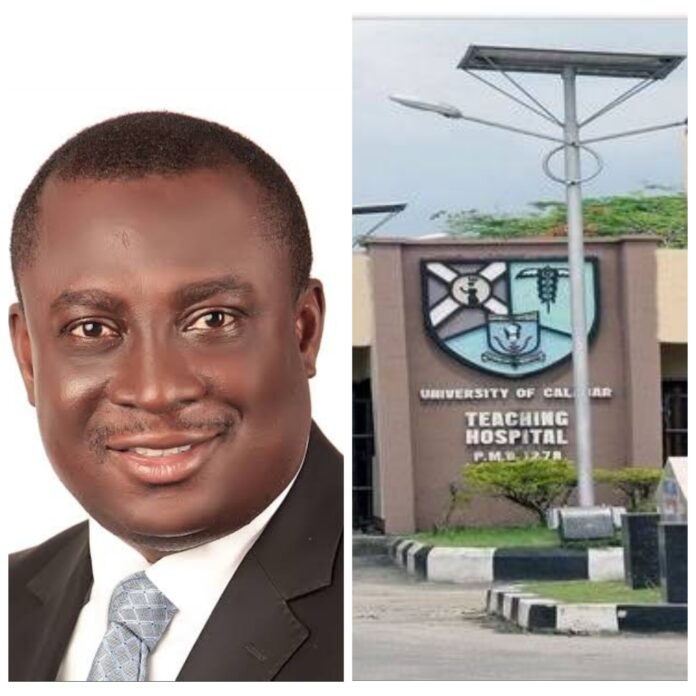 The University of Calabar Teaching Hospital (UCTH) is currently experiencing a striking magnitude and speedy pace of facelift as spearheaded by the current Board of the said tertiary medical facility led by the indefatigable Chairman, Col. Abdul Muhammadu (Rtd), a ‘highly reputed soldier who rendered diligent service to the nation and meritoriously retired, has proven his mettle as a gentleman of impeccable integrity by ensuring harmonious relationship between the Board and Management for the overall benefit of the hospital’.

The duo of Chief Antigha Abasi and Comr. Bassey Effiom the President and Secretary of Stakeholders Forum who had observed that these quality and quantity of development strides were actualised within the 2 years of the first tenure of the incumbent Chief Medical Director asserted that ‘Ikpeme… has injected a breathe of fresh air into a hospital that had been laid comatose for eight years (2011-2019).  Those were eight painful years of the ravaging locusts, caterpillar and cankerworms; years the UCTH was held at the jugular by interests whose sole ambition and pursuit was to plunder the hospital and satiate their unbridled greed for material accumulation.’

The group cleared grey areas surrounding the appointment of contract staff as Head of Department, according to the signatories the alleged bonafide staff has been queried repeatedly by the hospital management on grounds that subverts civil service regulations and thus the institution was cautious in assigning such figure to a sensitive role.

In a press release titled: Rising Profile of UCTH and dated 8th April 2021, Stakeholders Forum listed the following achievements:
*Obstetrics and Gynaecology: The current the Board and Management has undertaken and successfully accomplished the overhaul of facilities in the O& G Department.  The labour ward has been tastefully renovated.  A New Triage room was constructed while the Theatre, Antenatal & Gynaecology clinics complex were fully and beautifully renovated.  The icing on the cake for the Department of O&G was the installation of new laparoscopic and hysteroscopic surgery equipment.  We consider it a tragic irony that the immediate past CMD, a Gynaecologist, could not record any of these achievements for the department even after long eight years in office.  It took an orthopaedic surgeon to rehabilitate this department and upgrade same to international standard.
*Power: Black-out stands largely banished from critical units of the hospital.  With constant power supply, affairs of the hospital ensue unhindered round the clock in critical life-saving units.
*Water: The era of lack of water in the hospital is gone.  There is now an efficient and effective water system that guarantees supply and availability of potable water.
*Environmental Sanitation: UCTH no longer smells. Drainages are regularly desilted and evacuated.  The lawns are now trimmed and green, so attractive that visitors are commonly sighted using them as background scenery for selfies and photographic moments.  Erosion control projects are also on-going.
*Dental Clinic: The department has undergone total renovation, coupled with the installation and commissioning of five brand new state of the art Dental Chairs. 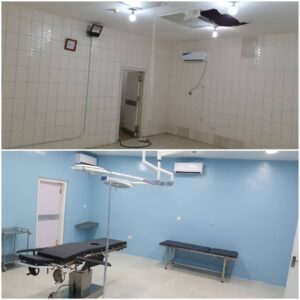 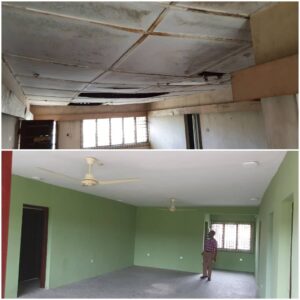 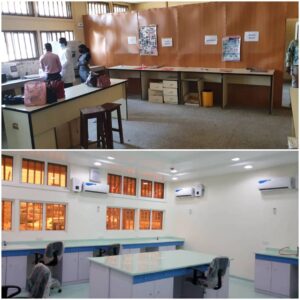 *Radiology Dept.: Similarly, this department has undergone total renovation culminating in the installation of 2 brand new 4-D ultrasound scanners, full digital direct radiography x-ray machine and a new 32 slice CT Scanner. The environmental upgrade that houses these facilities are topnotch.
*Isolation Centre/ICU: In line with the leadership’s avowed commitment to contain COVID-19 pandemic in the state, a new 30 bed modern isolation centre is being constructed alongside a new 10-bed level 3 ICU.
*Medical microbiology laboratory: The Medical Microbiology Laboratory has been completely renovated and upgraded to serve as the only anti-microbial resistance reference (AMR) laboratory in South-South Nigeria.

In addition, there is the:
*Orthopaedic ward: The female orthopaedic ward has been completely renovated and functioning effectively.
*Staff Welfare: The present leadership has continued to demonstrate unprecedented passion for staff welfare and development.  Staff are sponsored for further trainings relevant to their respective careers and promotion implemented for deserving ones.  Payments of various emoluments are usually managed transparently once funds are released.  It must be said that it is as a result of such show of significant commitment to workers that the UCTH has experienced relative industrial peace for two years now with no local strike nor threat of strike.  Every strike action in the last 2 years had been called nationally.
*Staff Discipline and Efficiency: While the current leadership has remained passionately committed to staff welfare and promotion, we commend their demonstrable objectivity in the management of issues of discipline and efficiency in service directed at enhancing productivity.  Not only does Management lead by example, but are also firm on decisions made in the best interest of the establishment.  This was recently typified in the Works and Engineering Department where an eminently qualified contract staff was appointed Head of Department (HOD) deservedly.  Expectedly, the appointment drew disaffection from disgruntled quarters on the bases that there is a bonafide senior staff who is “qualified” to head the Department.  However, that argument fell flat on its face when addressed.  The said officer, in the strict sense of the word, is not “qualified” to head the department.  Records, originated and well documented by the previous administration, reveal that he had been twice queried and warned for acts of Misconduct and Truancy.  A warning is taken seriously in the Public Services. Surely, a staff like that whose continued stay in service is by God’s mercy cannot be entrusted with the responsible office of HOD. Besides, the contract staff, although the law allows a relatively short time for such appointment, is a respectable character and his wealth of experience constitutes a dependable source of knowledge the junior ones in the Department shall continue to understudy, benefit from and subsequently apply for the good of the hospital. 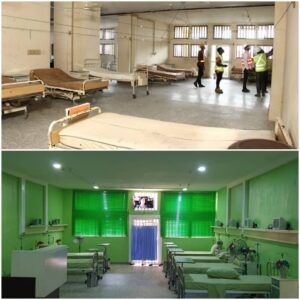 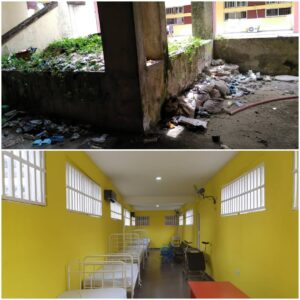 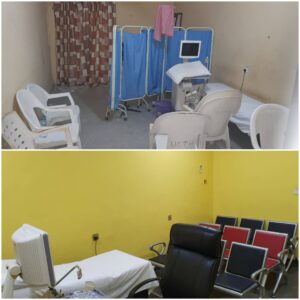 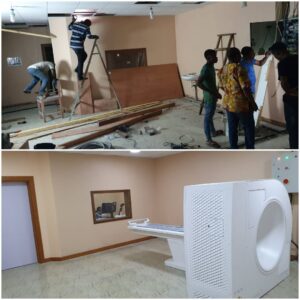 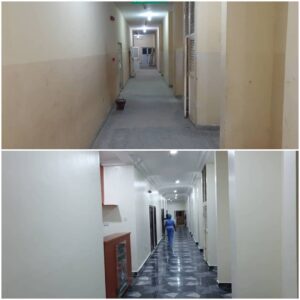 *Okoyong Health Centre:  The Health Centre, Okoyong, has been renovated and modernized thereby leading to increasing patronage of the centre by indigenes of the community and beyond.
*Completion of Abandoned Projects: Projects which were initiated in 2012/2013 and wickedly abandoned by the immediate past administration have been re-commenced.  So far, the current leadership has re-commenced work on the 56 suit laboratory to Radiology link road and secured visitors car park.  We believe the abandoned 56-Suite House Officers Quarters will soon come on stream.
*Health Records & Revenue Management: There has been introduction and deployment of electronic Health Records, Information and Revenue Management system which have engendered efficiency and blocked leakages in the system. 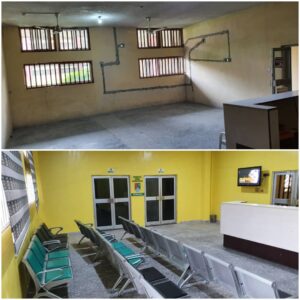 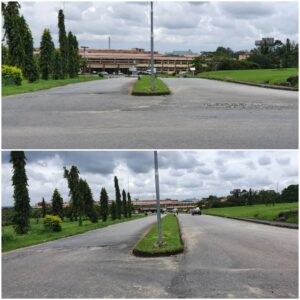 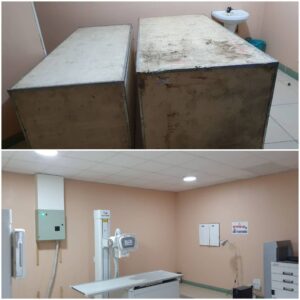 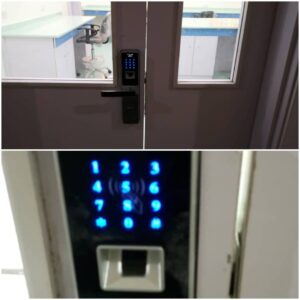 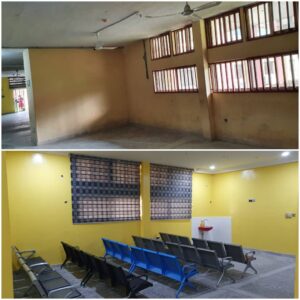 *ENT Nursing: The school of post Base ENT nursing has been renovated and working towards re-securing accreditation.  One the only such school in Southern Nigeria.  It was abandoned by the immediate past administration.
*Other Interventions: There are other areas of positive intervention including the beautiful streetlight project, the Ward Lightings, renovation of the mortuary, etc.  Concerning academics, many Departments that had lost accreditation to train our people for the benefit of our society have had their accreditation fully restored within the last 2 years.  Other Departments who never had accreditation now have successfully gained accreditation.  We can continue to count. 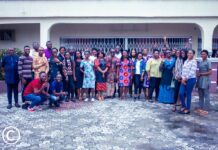