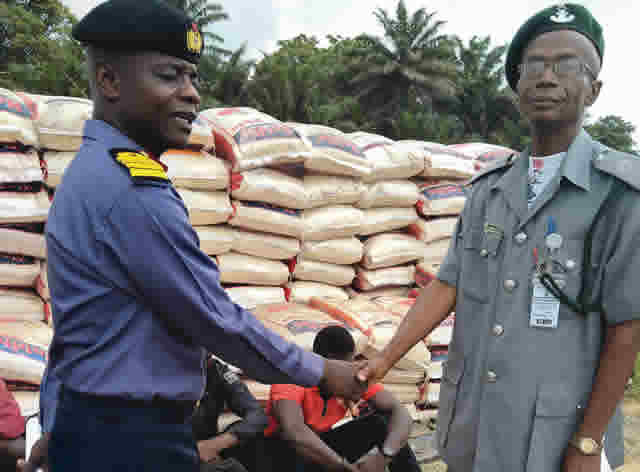 Personnel of the Nigerian Navy Ship Victory while patrolling the waterways in Cross River State on Saturday arrested three suspects with 1,209 bags of smuggled rice NEGROIDHAVEN has garnered.

The suspects were identified as Humble Edet, Christian Adebayo and Balle Philip.

The NNS Victory Commander, Commodore Chiedozie Okehie, while speaking with journalists at the NNS Victory jetty on Monday in Calabar, said the suspects were arrested for conveying smuggled items into the country.

Okehie, who was represented by the Base Operations Officer, Lt. Commander Clement Ayogu, said, “These suspects were arrested with a wooden boat laden with 1,209 bags of foreign parboiled rice at two nautical miles, South-East of the Calabar fairway buoy.

“The suspects were arrested on Saturday, September 11, 2021. We are handing over the suspects and the rice to officials of the Nigeria Customs Service.

“From our interrogation, the suspects were smuggling the items from Cameroon to Nigeria.”

Receiving the items, the Deputy Comptroller of Customs, Cross River/Akwa Ibom Area Command, Mr Mustapha Kaliel, commended the Navy for doing a thorough job along the waterways and promised to prosecute the suspects.

In a related development, the Federal Operations Unit, Zone ‘C’ of the Nigeria Customs Service, says it intercepted fake and contraband goods worth over N120.4m in July and August 2021.

The NCS Zonal Public Relations Officer, Mr Jerry Attah, in a statement on Monday, said the FOU Comptroller, Yusuf Lawal, listed the contraband goods to include 130 bags of 50 kilograms of foreign parboiled rice valued at N5,460,000, and 161 jumbo bales of used clothing valued at N22.5m.

Lawal said the cosmetic products, Artesunate injection and sweets did not have registration numbers from the National Agency for Food and Drugs Administration and Control.

The Customs boss advised Nigerians to be wary of fake and smuggled products, adding that they were not only hazardous to health, but also to the economy of the country.

He said, “Our men and officers are fully prepared to face smugglers head-on especially during the ember months in line with our mandate; we will leave no stone unturned.”