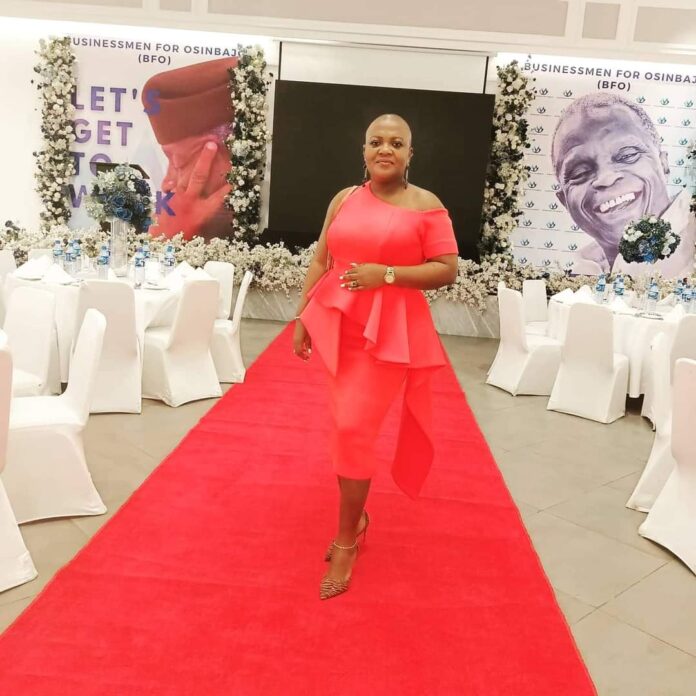 Diana-Mary Nsan a popular broadcast journalist in Calabar the Cross River state capital metropolis has given insights into why she is supporting the presidential aspiration of Prof. Yemi Osinbajo the Vice President of Nigeria.

She disclosed this on Thursday while having a chitchat with a netizen, namely, Kelvin Egari, who queried about the reason for her support.

Nsan said she is supporting Osinbajo’s aspiration on the grounds that she is keen about a better Nigeria, adding that Osinbajo qualifies because he is already intimate with Nigeria’s unique leadership challenge.

Her words, ‘Kelvin Egari… I honestly do not think we have done well as a nation. I believe we can do a lot better.

‘I have seen politics from an opposing angle. I have always opposed, not until I moved to APC (and I still query) and viola Governor moved there.

‘Why am I supporting the sitting vice president? If it’s intelligence, we are spoilt for intelligent options. Nigeria is blessed with that, too many intelligent people from all the parties. But you see the Nigerian political system, my brother is knit in a way that except you are in the mix, your quota may brush off, it may not even see the light of day, no matter how intelligent, rich, or good willed you are.

‘I have never queried Evara Esu, what can he do really? I asked a question, what is the role of the VP, having documented his bit, his boss has the final say. Resign I hear you say. You ever heard of diplomacy and strategy. Read about the trojan horse. Even your Bible says when Christ saw the glory ahead he withstood the cross. If we have come this close why will we discard the closest to positive possibilities? Based on intelligence, experience, humane disposition, understanding the Nigerian stratification. Go and look at the success he recorded the brief moment he acted as president. I will not bicker on why I support him.

‘My goal is for a better Nigeria, if I wanted anything more, I will support the bullion vans in my party. I am only saying, let us place the man who will not point at his father’s house with his left hand. Let us get inside and harvest the one who knows the house rat, so it’s chased out. We don’t have time for experiment, we don’t have time for familiarisation.

‘I support you to call for accountability from any seating govt ,I will sit with you,PYO is my choice. However if you understand the political system ,you will understand my submission. For those who wanted his declaration to be war, how could that have been?…’

@PhilipObin it seems at the instance you start talking talking about Professor Yemi Osinbajo your best can't help but just evolve.

See the masterstroke with which @dianamarynsan …the radio-cum-master of ceremonies diva delivers when she does what she knows how to do best. pic.twitter.com/nXu93fCWzo

Egari countered Nsan on what he perceived to be his reservations against Osinbajo’s style of leadership thus far especially his silence in the midst of certain controversial issues that have plagued the country.

His words, ‘Diana Mary Nsan Brilliant contribution, Ma’am! I appreciate your perspective to the theme of discourse. But, let it be known that nothing justifies Professor Yemi Osinbajo’s silence and/or inaction over time in the face of the egregious situation in the land. I mean, I can’t trust or take seriously a man who considers the pervasive insecurity situation with its attendant negative consequences, wave of impunity and brazen lawlessness, insensitivity and/or nonchalant attitude to the education of the citizenry, widespread hunger and deprivation in the land as ACHIEVEMENT(S) worthy of consolidation. I tell you what, that assertion in itself is his greatest undoing. It makes nonsense of his education and all that.

‘That said, need I mention to you that one of the qualities of a good leader is strength of character? That it wise to walk away when things happening around you are incongruous with your ideals? That if you’re neutral in situations of injustice, you have chosen the side of the oppressor? Don’t forget the rascally invasion of the houses of judges in the wee hours of night by operatives of the nation’s secret police, the unlawful ousting of Justice Onnoghen as CJN (the most unlawful in our entire history), the gruesome murder of an RCCG pastor in broad daylight by some Islamic fundamentalists, the list is endless. All of which he didn’t, at the very least, issue a statement in condemnation. Need I remind you that the VP is a pastor, a professor of law and a SAN?

‘Your silence gives consent and the world will not be destroyed by those who do evil, but by those who watch and do nothing, remember?

‘In closing, in appreciation of your constitutionally guaranteed right to freedom of thought, conscience..(S. 38), I respect your choice. It would be undemocratic and funny of me to expect you to like my preferred guy for the job, PETER OBI FOR PRESIDENT 2023, so to say.’

I am today, with utmost humility formally declaring my intention to run for the office of the President of the Federal Republic of Nigeria on the platform of APC. pic.twitter.com/atggfEnF2Q