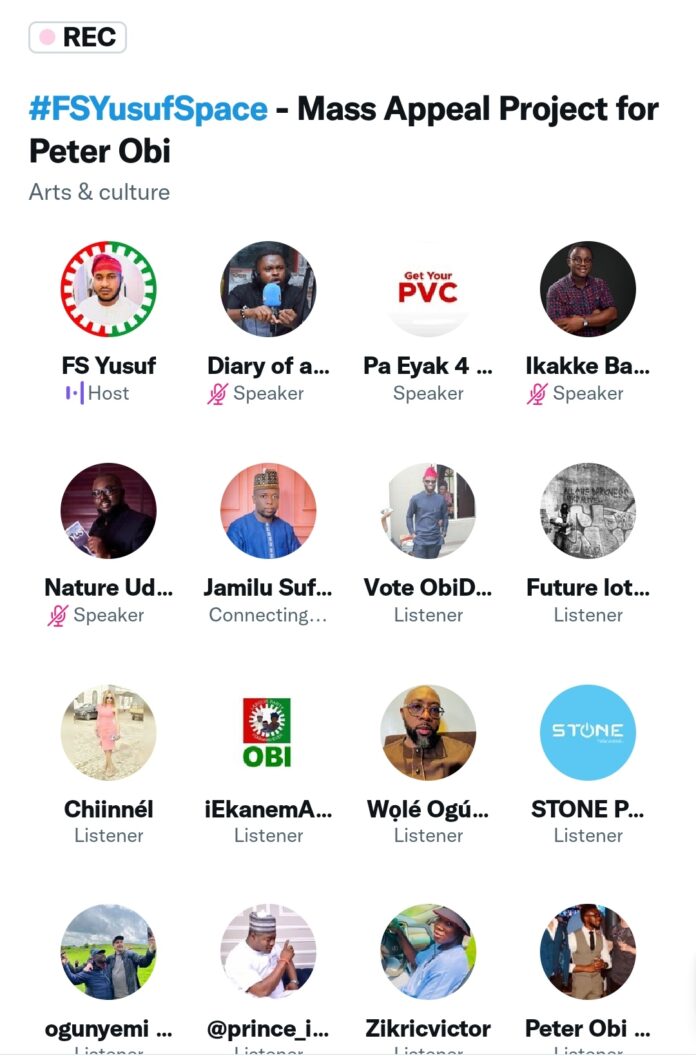 The conversation which began from 7PM (WAT) and ended at 11.36PM was co-hosted by Twitter influencer @FS_Yusuf_ and @IkakkeBassey the Director General of MAP Nigeria including @MmantiUmoh, had @paeyakdpeople, @EfioItaNyok and @nature_udoh as permanent speakers.

According to the organisers, the goal of the conversation was ‘To give #Obidatti and Labour Party brand visibility across the State, and to reach out and harness support for Peter Obi from the rural and unreached areas’.

The conversation which was attended by well-over two thousand persons saw participants speaking passionately to the topical issues already highlighted. The Secretary General of MAP Nigeria, Efio-Ita Nyok, in an interaction with our correspondent disclosed that, ‘the take home from Tuesday 27th September 2022 Twitter Space Organised by Mass Appeal Project, MAP Nigeria are as follows:

‘There’s a (fundamental) structural problem in respect of the synergy between Labour Party, LP and political support groups across the country beyond LP Cross River and Akwa Ibom. This structural defect has significant implications for Obi/LP’s anticipated emergence.

‘Political support groups must admit that, constitutionally, there is no independent candidature in Nigeria so they must look for a way to walk/work with LP which is the sponsor for Peter Obi as her presidential candidate

‘LP across the country must also admit that she can’t successfully prosecute the presidential elections without working/walking with political support groups. This is premised on the fact that LP wasn’t ready for the defection of Peter Obi to LP. And these support groups have an energy that should be deployed accordingly

‘Finally, there’s dire need for a strategy which would help LP and political support groups to walk/work hand in gloves’, Nyok concluded.