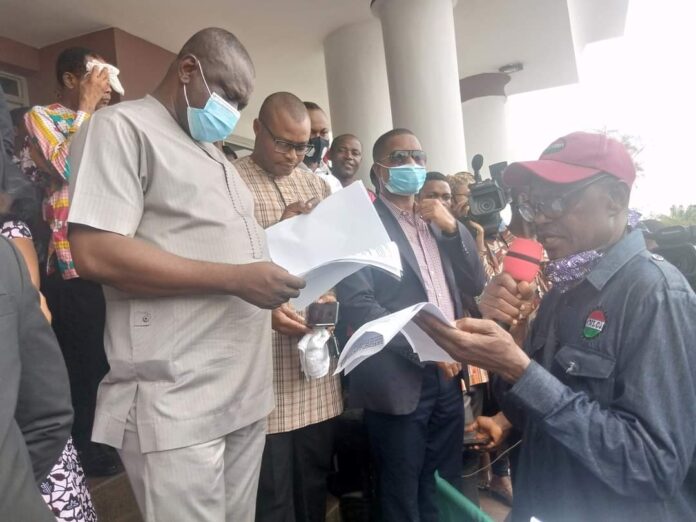 The Speaker of the Cross River State House of Assembly, Rt Hon. Eteng Jonah Williams has assured Organised Labour that the State Assembly will reject the proposed bill seeking the transfer of the National Minimum wage from the Exclusive Legislative list to the concurrent Legislative list, sponsored by Honourable Datti Mohammed (Kaduna State) at the House of Representatives.

Williams who was speaking when Members of the Nigeria Labour Congress (NLC) and the Trade Union Congress ( TUC), Cross River State branch were at the Assembly’s Complex for a peaceful protest emphasised that the State Assembly will reject the concurrent confirmation of the bill adding that the House was in total solidarity with them over the matter.

He said, “If the so-called bill comes to us for a concurrent confirmation, we will reject it. We work for the people, we are elected by you, so if you say the bill is anti-people, the Cross River State House of Assembly will not support it. I will take my copy to the conference of Speakers for us to deliberate on it and take a decision. That decision must be favorable to the workers”.
The Speaker commended the Organised Labour for it’s peaceful disposition during the protest while assuring that other concerns of workers in the State including the payment of the backlog of gratuity to retired workers will be taken up in collaboration with the newly appointed Head of the State Civil Service, Mrs. Geraldine Akpet-Ekanem.
“On the issue that concerns the State, especially the payment of gratuity, on more than three occasions, we have taken the matter up as a House. We will continue. Am happy you are meeting with the new Head of Service. I will also meet with her. It’s part of the issues, I want to discuss with her and advise her on what to do before forwarding it to the Governor for his approval”.
Earlier, the Organised Labour had presented their greviances in a document jointly signed by the Chairmen and Secretaries of both the NLC and TUC in the State and read by Comrade Ben Ukpebi ( State chairman of NLC), informing that, a private member bill moved by Honourable Datti Mohammed of Sabon Gari Federal Constituency of Kaduna State and sponsored by a few Governors which speaks to transfer the National Minimum wage from the Exclusive to the Concurrent Legislative list had been rushed through the first and second reading and subsequently referred to AD HOC Committee on constitution Review.

Ukpebi hinted that the implementation of the bill which he described as anti labour was very dire as it will give State Governors a license to implement “slave wages, create and expand a community of the working poor as well as lead to the exclusion of the private sector from the concept, rational and logic of a National Minimum wage”.

The Organised Labour prayed the House of Assembly to intervene and reject the bill while informing that the nation wide protests in all the thirty six States of the Federation and the FCT, were part of a line of industrial actions to be undertaken in order to buttress and drive home their greviances.

Members of the Organised Labour carried placards reading amongst others; “Release Gratuity to RetireEs”, “Promotion Implementation”, “Against Decentralizing the National Judicial Council”, “Deduction from workers Salaries should be released without delay”. 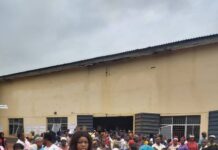