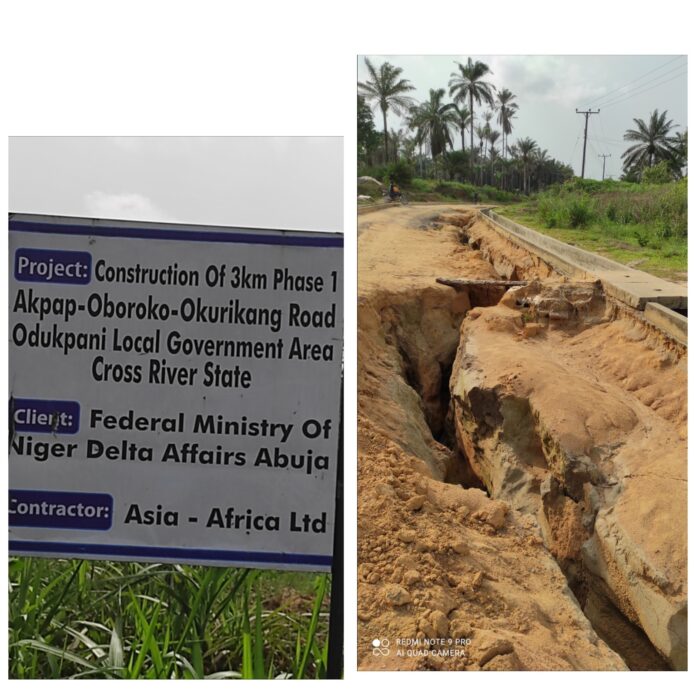 The Obot Oko community of Akamkpa Ward in Odukpani LGA of Cross River, Tuesday, tasked the Niger Delta Development Commission (NDDC) to return to the abandoned site of construction of the Akpap-Oboroko-Okurikang 3KM Road NEGROIDHAVEN can report authoritatively.

Our correspondent garnered the above development during the facility inspection tour of designated projects in Odukpani/Calabar Municipality Federal Constituency by Rt. Hon. Eta Mbora the lawmaker representing the said federal constituency at the 9th National Assembly (NASS).

During an interview with a cross section of journalists and bloggers at Obot Oko, the village head of the Community, Denoenou Ekpo Ebe Otu expressed mixed feelings at ongoing projects in his community. He said he was both happy and quite sad at the same time.

According to Otu, ‘We are happy at ongoing construction projects especially the completion and furnishing of the 6 classroom blocks at Government Primary School, Oboroko Okoyong in Odukpani but, we are sad at the incompleted and eroded section of the Akpap-Oboroko-Okurikang 3KM road because being a joint project with the NDDC, and Ministry of Niger Delta Affairs the NDDC section has not been fixed. We are asking the NDDC to return to site because of the rains that is coming.’

On his part, Elder Denoenou Ekpo Okon, a former Commissioner for Works in Cross River and Commissioner at the NDDC appreciated ongoing works in the community but made reference to the eroded section of the Akpap-Oboroko-Okurikang 3KM road. Okon said, ‘It’s an opportunity to thank our representative at the House of Representatives for his community-focused projects. Oboroko Okoyong is a village with a lot of agricultural potentials. One of its greatest challenges has been access. But, we’re challenged a bit as you can see because of funding.

‘The NDDC section of the project is facing a lot of challenges because the contractor has moved out of site for awhile. But that does not in any way undermine the fact that it’s a project that, our representative out of love for the people undertook to push. We want to use this opportunity beg the NDDC to look into this project because it’s a project —Look at the extent of erosion —if it is not looked into now, the purpose would have been defeated.’

On his part, Rt. Hon. Mbora while reacting generally to the inspected projects but particularly to the development at Oboroko observed that, ‘We understand the complications and problems of the contractors… the Oboroko people, the primary school is completed, furnitures are complete and they are happy but, we need to address the issues of the road. We appeal to the agencies… The NDDC and MNDA to intervene. Ours is to push and facilitate at the floor of the House and ensure the completion of these jobs. 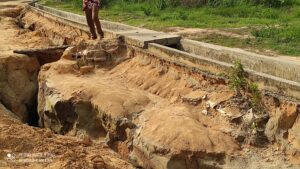 ‘I will profile these visits and the agencies that are concerned will have copies, I will reflect with them… and press on them from the floor of the House for the completion of the jobs.

‘One of the key instructions of Mr President is that priorities should be given to on-going jobs: They must be completed before other ones are awarded but, what we see with agencies is that they are by-passing this and still awarding new ones while the old ones are suffering. That’s why I had to do this critical inspections and determine the status of the jobs, and show them bare that these are how these jobs are, there’s a plea of the communities, these are the strong needs of the communities.’

The ongoing critical inspection will look at six ongoing/completed projects including constructions of Solar-powered Borehole at Asiaha Obufa, Adak Uko in Creek Town; Erosion Control and Embarkment at Ikoneto beech; Odot Health Centre in Ndon Nwong; and Akim Akim in Odukpani Central Ward, all in Odukpani. Further inspections will continue today with an assessment of projects in Calabar Municipality.