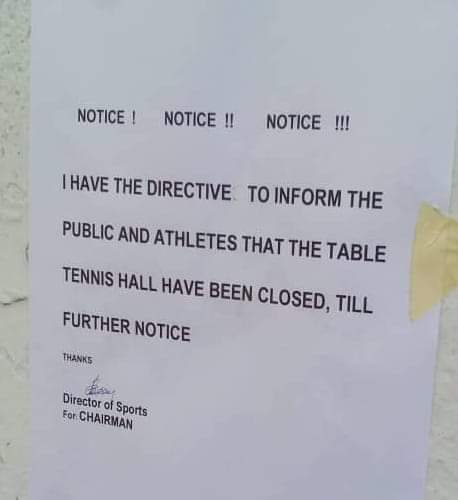 The attention of the Cross River State Sports Commission has been drawn to a publication authored by one Francis Etang which contains a lot of misinformation and outright lies. The Commission will, ordinarily have ignored the said publication but for the fact that it is obvious the intention of both the author and his sponsor is to portray the Commission in bad light before the public.

To set the records straight, the Table Tennis hall in the premises of the U.J Esuene Stadium is owned 100% by the Cross River State Commission. Together with the Cafe and Gymnasium, it was built with proceeds from the lease agreement with MTN to build the telecom mast within the stadium premises.

Secondly, the Commission had, shortly before the last National Sports Festival which held in April in Benin reviewed the leadership membership of governing boards of the various sports associations in the State. To this end, Ntufam Edim Inok was appointed as the Chairman of the Cross River State Table Tennis Association. One of the first tasks before the new board is the refurbishment of the Table Tennis Hall and the Gymnasium, both of which are due. The work is planned to commence this week and that necessitated the temporary closure of the two facilities to players for the period of renovation.

Thirdly, table tennis players who use the Tennis Hall for their practice sessions are staff and representatives of the Cross River State Commission. They represent the State in major tournaments and it is to the interest of the Commission and Cross River State at large that they are given all necessary support, including good training facilities, to enhance their competitive advantage. So is the author suggesting that the Commission will deliberately sabotage its own players by denying them training opportunities? It is a no brainer that the Commission stands to gain nothing from limiting the competitiveness of its players. On the contrary, it is counter productive and the Commission clearly recognizes that fact. Oh, and by the way, Aruna Quadri and Funke Oshonaike were never trained, sponsored, or played for Cross River State at any point in their careers.

It is a sad thing that the writer has alluded to the refusal of Hon.Chief Orok Duke, the immediate past Chairman of the Commission, to defect with the Governor from the PDP to the APC as the reason for the temporary closure of the Hall. Nothing can be far from the truth. It clearly shows that the mentality of the writer, and possibly his sponsor, is to reduce everything, including serious government business, to politics. To the best of our knowledge Governor Ayade has not compelled any appointee of his to follow him to the APC let alone Chief Orok Duke who, presently, is not an appointee of government. This is a clear case of playing to the gallery. We also advise Francis Etang to grapple with the fact that not everything is about partisan politics.

Finally, we will like to urge the public to totally disregard the mischievous and false publication in its entirety. The Commission is focused on returning Cross River State back to it’s former sporting glories. We will not be distracted by paid agents of destabilization.