Akwa Ibom State University has expelled EKPO Iniobong Isang, a final year student of Engineering in the institution over his Facebook thread against, Udom Emmanuel, the Governor of the state.

On September 7th, the institution suspended the Department of Agricultural Engineering student for what they termed “gross misconduct.”

The student had made a post via his Facebook page reminding Governor Udom Emmanuel that he is yet to redeem his pledge of employing first class graduates of the institution as well as giving them N100,000 each, as promised. 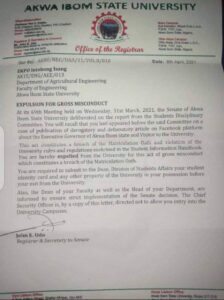 But in a letter dated 9th April, 2021, the university announced the expulsion of the student for the same ‘gross misconduct’ which they said, ‘constitutes a breach of the Matriculation Oath.’

In the letter signed by John E. Udo, the registrar of the school, they also directed the chief security officer to deny him access to the institution henceforth.