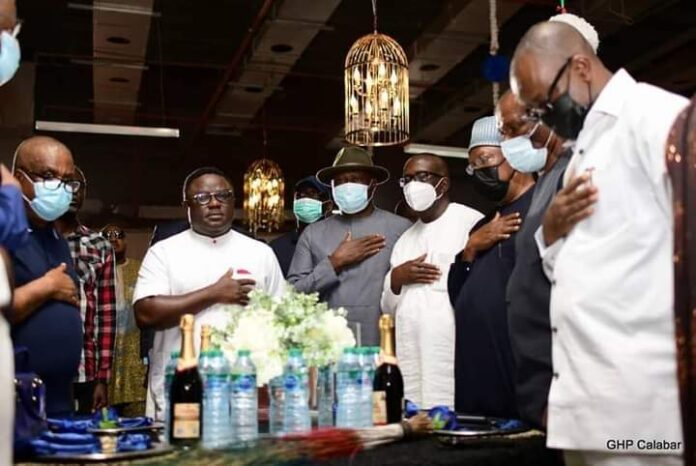 Cross River state governor, Professor Ben Ayade has called for an end to factionalization in the state chapter of the All Progressives Congress, APC.

The governor at the occasion reconciled feuding members of the party who publicly embraced one another.

According to the Governor, “the only way the APC in Cross River State can prosper is if we put the past behind us and create a new focus, a new opportunity that will gurantee everyone of us to sit on the same table.”

He assured that he will not play politics of former or current APC”.

He noted that by his defection and judging from the array of APC chieftains present at the event, his former party, the PDP was death and buried in Cross River because “anyone who is not here is nowhere”.

Several party stalwarts at the integration dinner hailed the governor’s movement to the ruling party, describing it as strategic, timely and in the interest of the state.

For Dr.Mbu, “this is a great victory for all of us and it’s only the beginning. What I see that lies ahead of us is far greater than what we are seeing here now. We are sure that our leader and Governor will take Cross River State to a different level”.

On his part, Senator Ndoma-Egba lauded the governor’s decidion to leave the PDP, describing his former party as “someone’s personal estate.

“Your Excellency, welcome to a political party. You just left somebody’s personal estate to a political Party. As a state, we are too weak and too vulnerable to be in opposition”, he said.

While congratulating Ayade on his defection, Pastor Usani urged him, as a leader of the party in the state and the entire south-south, not to be hasty in taking decisions concerning the APC.

In his remark, Senator Eno appealed for a closing of ranks in the party, saying whatever differences that had existed in the Cross River APC were over.

He told the governor that his name will be written in the sands of time for positive reasons.