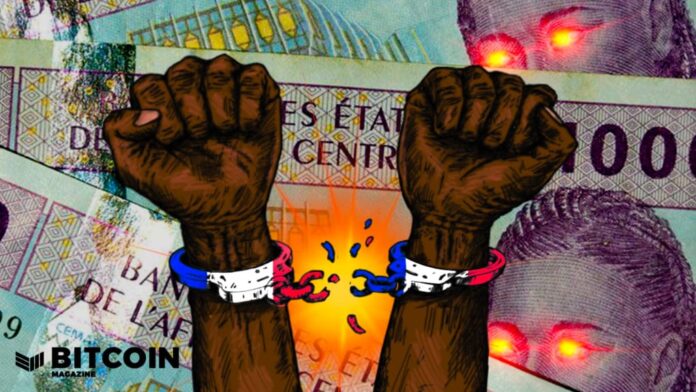 France controls 15 African nations and 180M+ people through the CFA franc currency. The details are shocking.

Can Bitcoin be a way out?

It begins after WWII, when the French empire started loosing chunks of colonial territory. Indochina, the Levant, North Africa… but they refused to let go of West + Central Africa. After 1960, political colonialism was unacceptable, so they settled for monetary colonialism.

This means Paris still has monetary control over 183M people across a territory of 2.5 million square kilometers, an area 80% the size of India. CFA nations do not control their own currency. To this day they must place 50% of their reserves (!) with the French Treasury.

CFA nations have no discretion over these reserves stored abroad, and they struggle at the expense of domestic spending to keep that 50% requirement. They pay 45M euros per year to Paris for the creation of notes and coins, and trust the French with 90% of their gold.

Here, CFA nations will take out a loan from France, and have little choice but to hire French companies to do the work. So the loan principal returns to France, but the African nation is still saddled with both principal and interest. A great deal for Paris.

Zooming out, CFA nations traditionally have sold raw materials to France and beyond, but a big chunk of their earnings has to go into the 50% national reserve requirement, where much of it is invested back into French or, today, European government debt.

The monetary repression at play forces CFA nations to keep a big % of savings in French hands, prevents them from creating domestic credit, forces them to borrow from regional central banks at v high rates, prevents robust export-led development, and ensures import reliance.

This has historically had a colonial effect: CFA nations can’t properly industrialize, and have over time been forced to supply raw materials to the “metropole” (imperial homeland) which finishes them and sells them back to the former colonies at high prices.

Today the CFA system has been “Africanized” and the notes show African culture instead of French, and the central banks are in Senegal/Cameroon/Comoros instead of Paris, but these are superficial changes. The French still make decisions + hold veto power over monetary policy.

The @WorldBank/@IMF have cooperated to enforce the CFA system. The IMF in particular has forced govts to abide by French policy. For ex. by threatening to cut off funding unless they accept devaluation. By 2100 trends point to ~800M living under this exploitative system.

This system has allowed France to exploit the resources and labor of CFA nations, while preventing them from deepening their accumulation of capital and developing export-led economies. The results have been catastrophic not just for democracy but also for human development.

10 CFA nations recorded peak levels of average income before the 2000s. In the last 40 years the region’s average purchasing power has deteriorated almost everywhere. In Gabon the highest average income was recorded in 1976, just under $20k. Today it is less than $10k.

A staggering 10 out of 15 CFA nations are marked “least developed countries” by the UN alongside Haiti, Yemen, Afghanistan. In various international rankings Niger, the Central African Republic, Chad, and Guinea-Bissau are often counted as the poorest countries in the world.

France denies that the system is exploitative. As French economic minister Michel Sapin said in April 2017, “France is there as a friend.” During decolonization, de Gaulle promised stability for nations that stuck to the CFA, and risk and chaos for those who would leave.

Any govt that opposed the CFA system fared poorly. After trying to leave and create its own currency in 1959, Guinea was punished by the French secret service, which counterfeited huge amounts of its new currency and dumped it into the country, wrecking the fledgling economy.

In the 60s, 70s, and 80s, leaders of Mali, Niger, Togo, and Burkina Faso all tried to seek monetary independence, and were all overthrown or assassinated. They were all replaced by loyal, brutal, and dictatorial servants of the CFA system.

Today @Farida_N + @diopfode are leading movements to seek financial freedom in Togo and Senegal. The question is: what does that look like? Regional/national monetary independence may be better, but the threats of domestic tyranny and economic mismanagement still remain.

Bitcoin is a currency that breaks the wheel. It cannot be manipulated by governments of any kind, foreign or domestic. It is controlled by the citizenry. This is why @Farida_N and @diopfode say it could be the currency of real decolonization.

As shown in this popular cartoon by the Ivorian artist Yapsy, decolonization in the CFA countries was always a hollow gesture. For these 180M+ citizens, financial freedom is the only way out. Bitcoin and its open source, borderless network may be a way to achieve that goal.

To learn more about the CFA franc system and hear the remarkable stories of @Farida_N and @diopfode, you can find my essay here: https://t.co/wKFLzpEhMs