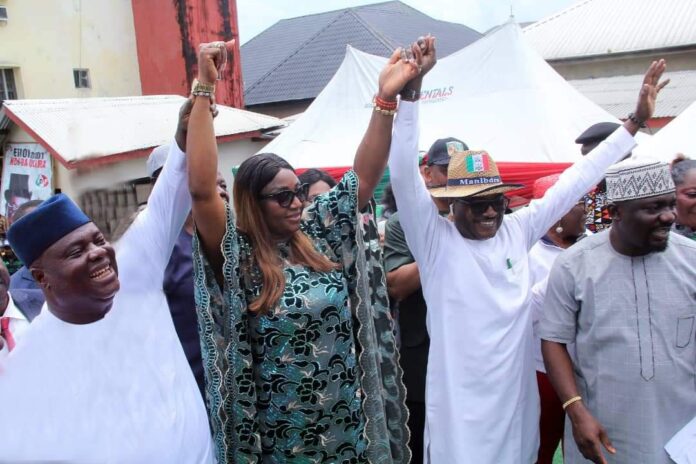 Vanguard gathered that there has been internal squabble on the selection of a deputy governorship candidate but her unveiling has put all that to rest as the party can now forge ahead in unity with its quest to take over political leadership of the state in the 2023 general election.

Speaking during the unveiling at the PDP Secretariat, Mary Slessor Rd, Calabar, Monday, Sandy said in the quest for a deputy governorship candidate they consulted stakeholders widely in a bid to ensure that everyone was carried along and on board with the decision to pick Emana as running mate.

He said that there was no 100 percent decisions in politics adding that everyone would sooner or later accept the choice they have made because of the painstaking consultation they embarked on.

His words : “When you make up your mind to lead it means you are ready to serve, leadership is service. The decision to pick Emana was a “double-barrel proposition” considering her youthfulness and gender.

“In taking the decision, there was no segment of the party that was not reached; men, women, youths, leaders, elders amongst others.

“We came to the conclusion that there is need to brighten up and strengthen our ticket. If you are a politician, you will know that you can’t mobilise without women.

“To simply put it, all the men who were available for the position were adequately qualified but we thought that we should not be selfish. Women cannot just be cheerleaders all the time, they need to be given a pride of place.

“We needed a double-barrel proposition, a woman that can appeal to the youths, a mother, visionary and a deep intellect who will be determined to work to change Cross River for good and take the state to where it ought to be.

“We find all these qualities in Ambrose-Amawhe. She has has momentum, vision , resilience, integrity and character. She is a woman of double-barrel proposition,” Onor said.

In her acceptance speech , Emana described her nomination as victory for every hard working woman and women in general.

She said she was ready to go on the journey with her principal to rescue the State from lack of governance.

“Women must be resilient and never give up on their dreams, the ticket does not belong to me, it is yours, it belongs to the people who have only given it to me to hold in trust for them.

“Let us keep aside our misgivings, and take back our dear state, Sen Sandy Onor and myself cannot do it alone, we need your support, we need you to achieve a new Cross River of our dreams,” she stated.