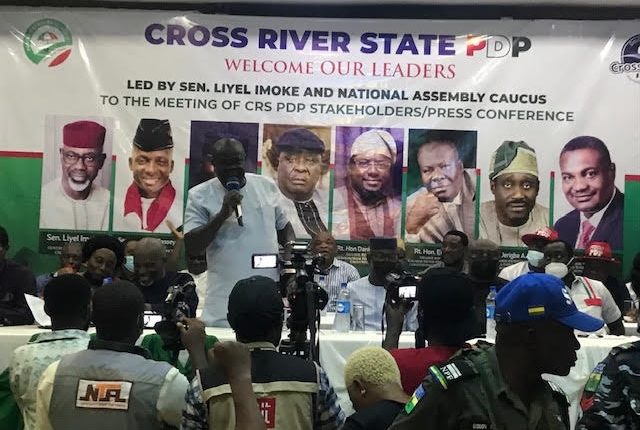 The crowd present at the event yesterday was very scanty for an occasion of such magnitude. One of those present yesterday made the observation to the hearing of our correspondent that ‘this is a statement of discontent with the selection of Emana Duke Ambrose-Amahwe as PDP Cross River state deputy governor candidate…’

Findings by our correspondent suggests that Ayi’s absence is not unconnected to his disposition against the candidature of Ambrose-Amahwe as his own choice was Rt. Hon. Dominic Aqua Edem.

It was further learnt that Sandy settled for Ambrose-Amahwe as a way of reconciling Sen. Gershom Bassey to his guber campaign. It is said that he took the decision to choose Emana without consulting with Ayi, a position Sen. Onor debunked on Monday while addressing the crown at the party secretariat.

This choice was reportedly facilitated by the state organising secretary of PDP, Francis Ekeng (a core ally of Ayi) as well as the state chair of the party in the state, Venatius Ikem.

However, a PDP councillor from one of the local government areas in Cross River South asked of what relevance to the party is Gershom Bassey’s reconciliation to Sandy Onor’s campaign?

Currently, the PDP in the state is factionalised as a result of this choice of Lady Ambrose-Amahwe as PDP Cross River running mate to Onor.

Amb. Toyo has sent in her congratulations while Hon. Eta Mbora was physically present.