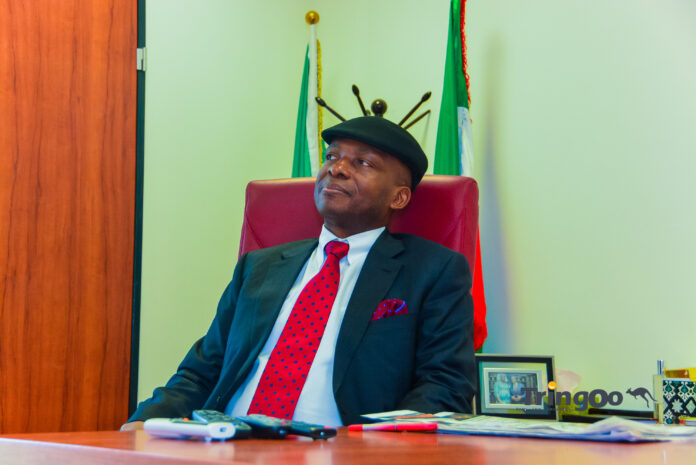 Following the alleged breach of the 2000/2001 fiscal incentive package conditions by SINOPEC-ADDAX, the Federal Government may have lost over N1.2trillion in oil revenue. In a statement issued in Calabar at weekend, the Senator representing Cross River South Senatorial district in the senate, Senator Gershom Bassey said he had earlier sponsored a motion on the floor of the house drawing the attention of government to that effect.

He stated that in 2000/2001 the Federal Government of Nigeria had provided a Fiscal Incentive Package to Addax Petroleum Company that saw the reduction of the company’s Petroleum Profit Tax from 85 percent in the 1998 Production Sharing Contract (PSC) to 60 percent in the 2001 Fiscal Incentive Package and the company’s share of oil lifting increase from about 45 percent to 56 percent. Addax Petroleum followed through by investing to grow production from about 10,000bopb in 2000 to over 100,000bopb by 2008.

From the purchase of Addax by Sinopec in 2009, Bassey who is the Vice Chairman Senate Committee on Petroleum stated that “the assets have witnessed significant production decline due to poor investment decisions making production levels to fall presently to approximately 30,000bopb with no developed gas.

“That Sinopec Addax despite holding a 100% Production Sharing Contract(PSC) with oil mining leases OML-123, OML-124, OML-126 has refused to stick to its end of the bargain to continue investing in the operated assets leading to a revenue loss of about $3.35 billion per year by the Nigerian Government…OML-137 is non-producing because the oil firm breached the Fiscal Incentive Package by neglecting to invest in that asset resulting in huge oil revenue loss to Nigerian”.

He said that “given the lack of any demonstration by Sinopec-Addax to stay in Nigeria because of the company’s unwillingness to purchase an office building and its refusal to invest for production growth, it is shocking that NNPC continues to honour the elapsed gentleman’s agreement that made Sinopec Addax operate these assets and lift 70% of the crude oil they are producing resulting in a huge annual revenue loss to Nigerian Government.

“That in 2016 the process of Value For Money(VFM) audit of $1.37 billion of cost oil that had been lifted by Addax Petroleum from 2007 to 2014 was initiated with the understanding that it would take three months to conclude”

Bassey who is also the Chairman of the Senate Committee on Federal Roads Maintenance Agency (FERMA) said the Senate is worried that, “since the initiation of the VFM audit in 2016, Sinopec Addax Petroleum has continued to enjoy oil over lift and have frustrated the process of conclusion of the audit to allow for the equitable and accurate determination of lifting.

“The Covid-19 Pandemic has negatively impacted on our economy and has thrown Nigeria into debt meanwhile the Federal government has over N1.2trillion of its oil revenue lying with Sinopec-Addax Petroleum Company and it will be leaving an abandonment/ decommissioning liability cost of about $750 million at the expiration of their stay in Nigeria come 2022”.