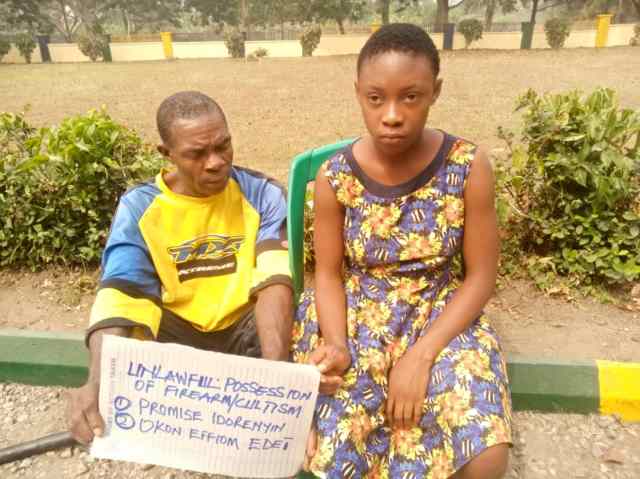 The teenage female student of Community Secondary School, Ikot Ewa in Akpabuyo LGA, who was arrested for unlawful possession of a locally made pistol has confessed that she also belongs to a cult group “Sky Queens Confraternity”.

She also disclosed that she has been sleeping with her “man-friend” since August last year and the man has been helping her with other things apart from paying her school fees. She made the confession on Friday at the Police Command Headquarters, Diamond Hill Calabar when she was paraded alongside her boyfriend who owns the locally made pistol and 11 others for various crimes.

Briefing Journalists on Friday, Cross River Commissioner of Police, Sikiru Akande disclosed that they discovered from their investigation that the girl was taking the locally made double barrel pistol to a blacksmith.

Akande also said that investigation was ongoing to unravel the mystery surrounds the ownership of the gun adding that a suspect, Okon Effiong, has been arrested and more details would be made known soon. 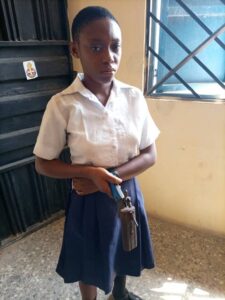 The Police boss however called on parents and guardian to cultivate the habit of getting closer to their children and wards to know what they do and who they mingle with.

He revealed that within the period under review 13 persons were arrested for sundry crimes including, kidnapping, armed robbery, unlawful possession of Indian hemp, vandalism amongst others.

Also the boyfriend to the schoolgirl, Okon Effiong, told newsmen that he has been intimate with her since August last year and I have been supporting her family too in so many ways.

“I am a married man with six children, I did not give her the gun, she took it herself where I kept it under the bed.

“I started sleeping with her August last year, her mother knows me, I have been doing small something on her head, they know she is my wife,” he said.

On her part, the schoolgirl also claimed to be taking the pistol to the blacksmith before it was confiscated by her school principal

”I am a member of Sky Queen Confraternity, I am just an ordinary member, I don’t hold any position in the group, I have known the owner of the gun who is my man-friend since last year, he sleeps with me and supports me with little things, but he is not the one paying my school fees.

My mother knows about him because he visits me at our house and sometimes he sleeps over at my place because I have my own room then in the morning he goes back to his own house,” the girl said.

When contacted, the Special Adviser to the Governor Ben Ayade on Education, Castro Ezama said it was important for parents and guardian to take the welfare of their children more serious.

His words: “It is not just about paying school fees and buying of uniforms, you must take care of your children and know them deeply including who they hang out with.

“We know the security agents are doing their investigation, but after that, we will definitely pick her up for proper rehabilitation.

There are many of her kind, who need to be rescued immediately, we have already contacted Humanitarian Aid and Social Welfare, and we also have qualified counsellor’s that will sit with her.

“Our interest is to save her from herself and make sure she is safe. Even though it is a failure from the homes, our teachers must understand the psychological needs of their students.

“We give kudos to the principal of the school, Mr Inyang Inyang who was able to spot that the child needed help, it could have been worse than what we are saying now.

“Inasmuch as we have zero tolerance for indiscipline and we teach two things; knowledge and character, we will not allow her to become what vices want her to be, she will be properly rehabilitated.

“Parents must do more because she is coming from a home, they spend more time at home than school, so parents must live up to expectations and take good care of their children,” he said.