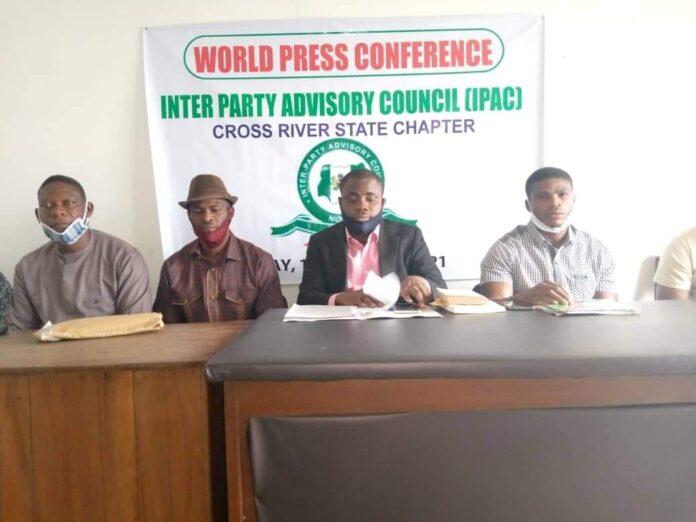 TITLE: CRS 2023; AN APPRAISAL OF OUR LEADERS AND THE QUEST FOR A BETTER REPRESENTATION

Good day Gentlemen of the press!

As you already know, on Wednesday, 3rd February, 2021, the national leadership of IPAC and INEC officials conducted what has come to be known as the most free, fair and credible IPAC election in CRS in recent times. This election culminated in the emergence of a team of young, vibrant and patriotic State Chairmen of different political parties as new leaders of the Council.

Inter Party Advisory Council is an umbrella body of all 18 registered political parties in Nigeria recognized by INEC. We have the onerous duty to relate with the Independent National Electoral Commission and other relevant organizations in consolidating and deepening our democracy, ensuring an environment conducive for successful elections, political stability, enduring democracy and overall wellbeing of Nigerians.

In this symbolic event today, we have come to assure the generality of Cross Riverians that we are have come with new ideas, ideals and energy to reignite and reconstruct a new narrative in the political landscape of our dear state. We therefore make bold to say without any fear of contradiction that the new IPAC is an independent body of different political parties and is not bankrolled by anybody. It is also important to note that IPAC is not an opposition political group, our interest is to work together with all stakeholders in the Cross River State project.

Poised to change the paradigm of political activities in the state, we have lined up a number of activities aimed at repositioning the state as we begin the journey to 2023.

Ahead of the forthcoming Continous Voters Registration starting in March, we are set to embark on aggressive mobilization of over 500 thousand Cross Riverians to register in order to boost the registration strength of our state.

To support the highly successful Operation Akpakwu initiative of the State Government, we will be holding a State Security Summit to enlighten our people about the need to take ownership of their security.

Furthermore, as part of our Corporate Social Responsibility, we intend to embark on the renovation of the State Library and the installation of e library facilities to boost the reading culture of our people as well as assist in facilitating students research. To achieve this feat, we will enlist the support of public spirited individuals as well as crowdfunding.

As political gladiators commence the oiling of their political arsenals ahead of 2023, it has become imperative to appraise the performance of our elected representatives from Local Government Chairmen, State and National Assembly Members and the Governor to measure their readiness or otherwise for the next political voyage. As the leaders of political parties in the state and the closest midwives to the people, we deem it necessary to demand the score card of those elected to serve our people as a yardstick to guide the electorate’s choice in subsequent elections in the state.

Research has shown that elected representatives in CRS ranks one of the least in the 36 states of the federation in delivering dividends of democracy to the electorates. It is common knowledge that immediately after election, over 80% of our representatives from Local Government Chairmen, State and National Assembly Members and even the Governor becomes disconnected, aloof, unaccessible and almost completely cut off from the people until the eve of the next election. Opinion poll shows that only about 10% of our elected representatives from the 18 LG Chairmen, 25 HOA Members, 8 HOR Members, 3 Senators have demonstrated average and fair representation of the mandate freely given to them by the people. Political Party Chairmen frown seriously at this staggering reality.

Legislative oversight is meant to crosscheck the executive by examining the activities of the Governor and the chief executives of MDAs. According to Commonwealth Parliamentary Association, the legislative function does not end only on the passage of bills but to follow the activity linked to lawmaking to ensure that such laws are being implemented effectively. Effective legislature enhances transparency, accountability, efficiency and fidelity in government.

We equally call on our National Assembly Members to brace up with the task of effective representation. We urge them to engage in town hall meetings with their constituents before appropriating Constituency Projects. We are sick and tired of the appropriation of cosmetics, barren and spurious constituency projects without considering the need of the people.

We equally call on all our legislatures at both State and National levels to sponsor bills that are capable of bringing development and empowerment to their constituents and not duplicating and recycling bills like setting up tertiary institutions or other obnoxious bills that have little or no impact on their constituencies.

The council also advice the state Government to prioritize ongoing state projects in order to ensure that the state does not become a firmament of abandoned projects at the end of this administration.

We are really poised to get Cross River State working again and therefore urge our leaders to collaborate with us by giving all necessary support to ensure a better state for all.