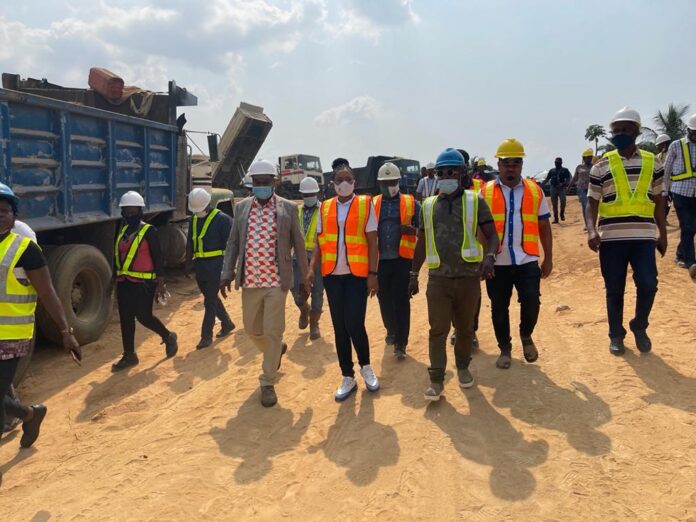 …As Dr Asibong receives team from Nigerian Society of Engineers

In continuation of her tour of projects across the state, the Cross River State Commissioner For International Development Corporation, Dr Inyang Asibong, has inspected the ongoing work across Calabar Metropolis.

Dr Asibong, who oversees the CRS NEWMAP was accompanied on the tour by management staff of the Project and government officials.

Speaking to newsmen at the gully site, Asibong said the inspection exercise was part of efforts in ensuring that the project meets the Environmental and Social Management Plans and ensure completion before rainy season.

Commenting on the project, the Commissioner admonished that the Cross River State Governor, Sen. Prof. Ben Ayade was determined to execute meaningful and quality projects that would benefit the people of all categories.

Expressing satisfaction with the work done at ensuring that the vital aspects of the job which might pose threat to the community is done and for meeting up the ESMP, Asibong promised the continued support from the state government to ensure 100 per cent completion.

“We are here at the Ikot Nkebre, Ikot Anwatim, and Nyahasang communities courtesy of the Cross River State Government and the World Bank NEWMAP to inspect the sites and the ongoing work happening here.

“Out of five fingers of the gully erosion, four fingers has been completed. The communities are actually happy with this, because the erosion ravaged the communities, destroyed and brought down houses before this intervention.

“We are happy at the pace of work we are seeing here. They contractors have promised to complete it by the end of the dry season. We are constantly monitoring this process and we know that with the way the work is going, by the end of April the work will be completed”.

“I want to thank Gov. Ben Ayade for providing the enabling environment and counterpart funds for the process and of course the World Bank NEWMAP”.

“The Environmental and Social Management Plan has been met, everything that is supposed to be done has been done, we are hopeful that before the beginning of the rainy season, the job must have been completed,” she said.

Speaking, one of the contractors, Engr Brown mentioned that the vital aspects of the job which poses threas to the communities have been completed.

“The job has gone over 80% completion, and hopefully we are looking at completing it before rainy season. The erosion job is dynamic, we are trying to meet up before the rain start coming. We still have other aspect of the job that is yet to complete, like the bioremediation jobs, the planting of grasses and other things”.

On his part, the village head of Ikot Nkebre, one of the Communities, Chief Anthony Nkebre, showered accolades on the State Government for coming to their aid.

He thanked the state government, World Bank and NEWMAP for coming to their rescue and putting smiles back on their faces.

Earlier before the inspection, a team from the Nigeria Society of Engineers in Cross River, led by its Chairman, Engr. Ndifon Agbiji, paid a courtesy call on the Commissioner in her office in Calabar.