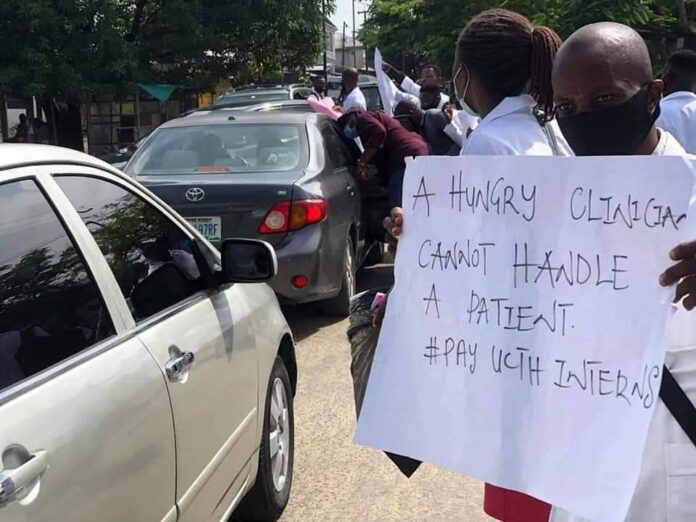 …it is a national challenge…CMD

The Medical Interns numbering over 150 barricaded the gate now of the hospital to demand their seven months salaries which according to them was no longer acceptable due to what they described as the insincerity of the management.

The protesters, who carried placard with various inscrptions including where ” where is the 66 million naira ” ” we are dying of hunger ” ” we can no longer buy sanitary pads” “Our landlords are on our necks, pay us our Seven months salaries”, “we cannot even see where to borrow again” ,”a hungry clinician can make a wrong diagnosis, please pay us so we don’t endanger our patients” while they chanted solidarity songs.

The interns are trained medical professionals in various fields who undertake another one year of practical training before they are qualified to take up a full employment.

Findings by NEGROIDHAVEN showed that they were paid a monthly salary ranging between N120, 000 and N150, 000 depending on their areas of speciality amongst other factors .

Speaking with our correspondent at the hospital gate, the medical interns and house officers lamented that they have worked for seven months without pay, but disclosed that the management rather pays them 16,000 while some get about 18, 000 monthly as allowance.

Some of them told NEGROIDHAVEN that the CMD disclosed to them that the hospital received 66 Million naira to offset their unpaid salaries but were later told that the Said money( 66 million naira) was paid into a “wrong account”.

“Our counterparts in other teaching hospitals in neighbouring state have all received more than 80% of what they were owed but here in Calabar, othing is forthcoming,while we were told that 66 million naira was released by the Federal Governnent on Monday the 17th of May.

“Every worker deserves his or her wages to enable him or her leave a comfortable life while discharging his or her respective duties just like their colleagues in other federal teaching hospitals.”

When contacted , the Chief Medical Director of UCTH, Prof. Ikpeme Ikpeme, said that the issue of non payment of their salary was not limited to UCTH interns alone.

“The issue of non payment of the stipend is not limited to UCTH alone. This is a national issue and we have written to the federal government to pay them.

“We are hoping to get a favourable response from the federal government as regard their payment; once the money is released to us, we will pay them accordingly,” he said.

However, findings showed that Salaries of interns ,House officers and contract staff known as none regular staff are paid through Governnent integrated Financial Management Information system( GIFMIS ) and house officers are paid centrally.

Moreso payment for interns and Contract Staff in contracts staff is budgeted for and through the GIFMIS platform controlled by the institution.

When contacted on Thursday , Eluomuno Afam Edward told Vanguard that up till now the leadership of the institution have not addressed them again apart from the little clarification given by the CMD at the gate yesterday .

He said : “Contrary to rumours that we had a meeting with management yesterday ,we did not to the best of my knowledge apart from the address that the CMD made during the protest at the gate .

“The assertion that the challenge was a national one is not totally true ,because our counterpart in other Institution’s across the country have gotten more than 50 % payment ,bit our case is peculiar ,today we hear IPPIS another day we hear something else .

“We are appealing to President Buhari to help us ,we are dying of hunger ,and it is becoming unbearable ,the minister of health and Finance should look into our matter ,” he said. 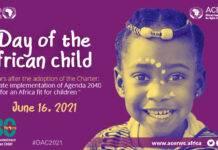 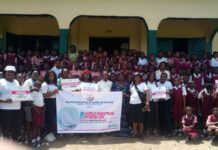 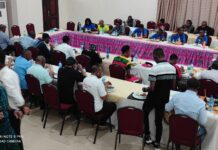