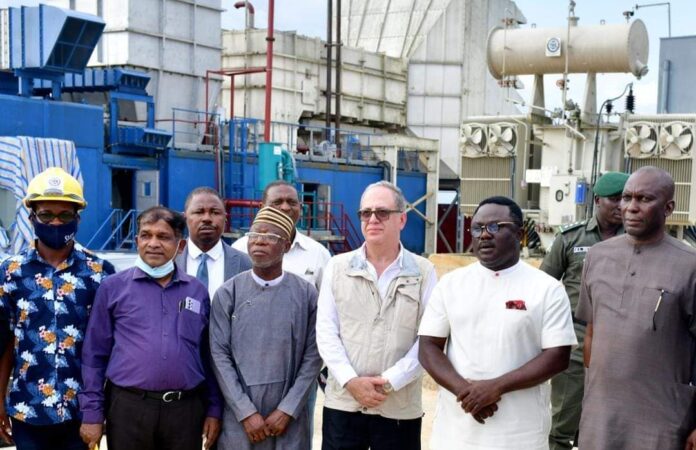 As part of effort to boost the Micro, Small and Medium Enterprises (MSMEs) in the state, Cross River governor, Senator Ben Ayade, has promised a quick completion of the 27 megawatts Adiabo power plant at the Tinapa Business Resort.

Ayade who gave the assurance while inspecting the level of work along with Mr. Jitender Sachdeva, President, Skipperseil Group, Nigeria, said “the idea is to ensure that the MSME’s have opportunity to have electricity and grow the local economy.”

On the trickle down effects to MSMEs, Ayade who spoke on the tarrif structure disclosed that “we have a tariff regime that structures gas supply systems in such a way that there is a discounted price when you are doing gas to power whereby you sell gas at subsided rate to be able to generate electricity so that the cascading effect will be such that the public out there, the SME’s will have power at very subsidized price.”

According to the governor, “this project is actually a social electricity project intended to give electricity to the poorest of the poor and communities around.”

On the installed capacity, the governor said: “We have 27mw here with a potential to install another 27mw which gives us a combined cycle that can bring in a third. When we get to that capacity, we will be in a position to feed the national grid.”

Governor Ayade said his government was considering bringing in a third party investor “who will be the operator of this plant, having been installed by the main contractor skipper. And we are happy to announce to Nigerians that Cross River State is getting another power plant of 27mw , the one in parliamentary is 23mw. The cumulative effect of this is that Cross River State and indeed Calabar in particular will be the first state capital that will run on 24hours electricity without fail.”

Expressing excitement at the multiplier effects of the project, Ayade noted that “the project is coming also at a time that we are pushing for our metropolitan fibre optic line to give us power to homes, city wifi and smart wifi and wifi to homes, which means that you can have a wifi connectivity directly from your house at a negligible cost.

“So the catalytic combination of subsidized power alongside with the wifi services will give Calabar the 21st century exposure we dream about and that’s where we are.

“We are at 80% installation capacity. We just have few containers we are expecting to arrive shortly. By the close of next week, we should be done with all imports and focus on the 8inch gas pipeline. We already have the modular scrobars installed, so we will just tap into the Savannah energy pipeline and circuit it into the system and properly socket just like we have socketed into the centre. We will socket into the electricity value chain and bring value to Cross Riverians.”

On the completion date, “they are looking at April next year. But I am back tracking it to December this year because my people have to have electricity in greater Calabar. But of course once the plant in Odukpani starts running, this one runs and the one in Parliamentary runs, we will be having a combined capacity of almost 600mw generated within Calabar,” Ayade hinted, adding that “it therefore means that we have to set up a state transmission line that will share power to the rest of the state all the way to the Northern Senatorial District, particularly the Obudu Cattle Ranch where we are currently doing a three megawatts hydro power plant in combination with the wind system.

“So I am focusing on energy as a way of liberating our people from the horrifying dependence on the very difficult national grid. And I am proud to say that a Cross Riverian is the Minister of State for Power and he is working aggressively, supporting us to see to the realization of all these power projects.”