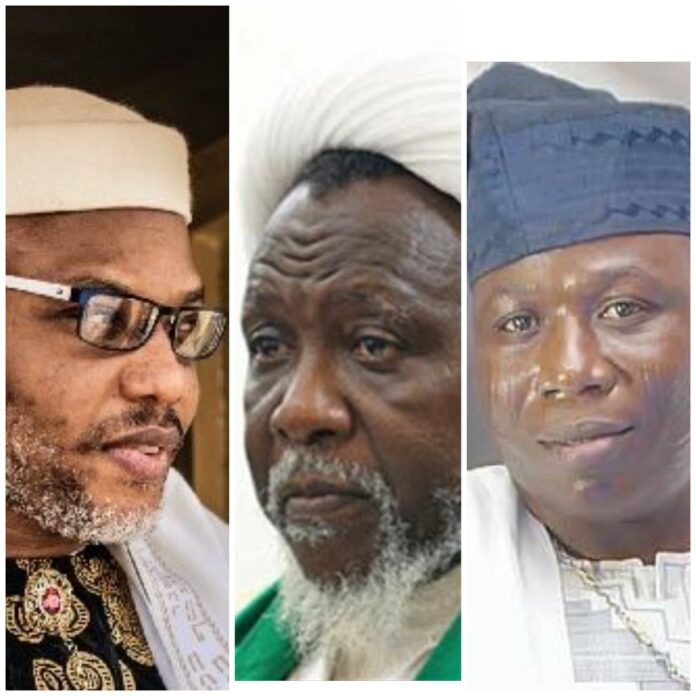 President Muhammadu Buhari-led federal government has been described as being extremely brainless and never learns from certain politico-historical circumstances.

This disclosure was made on Twitter by Aisha Yesufu the co-founder of Bring Back our Girls (BBOG) campaign and a heroine of the EndSARs protest in October 2020.

She observed that the arrest of separatist leaders like Nnamdi Kanu of the Indigenous People of Biafra (IPOB), Ibrahim El-Zakzaky of Islamic Movement of Nigeria (IMN) and Chief Sunday Adeyemo popularly called Sunday Ighoho, the Yoruba activist does not achieve anything positive for the state except to transform them into political martyrs.

Buhari's government is extremely brainless and never learns from it's mistakes. What did the arrest of Nnamdi Kanu in 2015 achieve other than to make him into a demi-god? What of arrest of Zakzaky? Made his followers more determined. Now attack on Sunday Igboho's residence?

According to Yesufu, ‘Buhari’s government is extremely brainless and never learns from it’s mistakes. What did the arrest of Nnamdi Kanu in 2015 achieve other than to make him into a demi-god? What of arrest of Zakzaky? Made his followers more determined. Now attack on Sunday Igboho’s residence?’

This was the havoc done at Chief Sunday Adeyemo's (Sunday Igboho's) home at 1.30am this morning by soldiers and security agents. They surrounded the house, laid siege on the occupants & then attacked.Two people were killed & their bodies were taken away whilst a large number..1/ pic.twitter.com/owReRoXqrD

Igboho’s residence was attacked Thursday morning around 2AM by the military and Nigeria’s secret police numbering over 100. His properties were destroyed and 8 people were reportedly killed and dead bodies taken away from bloody scene including his wife abducted and cats.

Recall that IPOB’s leader was arrested and detained on 15 October 2015 by Nigeria’s secret police the DSS, while El-Zakzaky and his wife were both detained in December 2015 for charges including unlawful assembly, culpable homicide and disruption of public peace. Meanwhile, the residence of Yoruba secessionist leader, Igboho in Ibadan, has been breached by the military officers suspectedly.