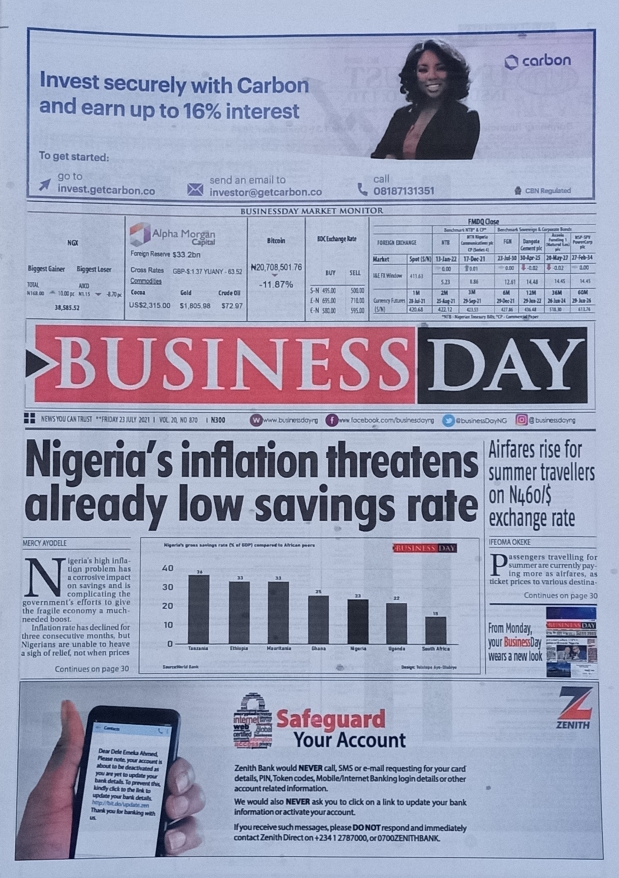 The N50billion Export Expansion Facility Programme (EEFP) trended on social media as many Nigerians highlighted some of the benefits of the initiative introduced by the Buhari-Osinbajo administration, to include, but not limited to the provision of incentives for Nigerians to expand their business-reach and become a better version of themselves in business.

The EEFP which trended alongside #SaveJobsCreateJobs, #Pandemic2Prosperity, #ECOWAS is one of the trenches in the Economic Sustainability Plan (ESP) developed by a special committee chaired by the Vice President Prof. Yemi Osinbajo.

Some of the engagements on the trend are captured below:

@ProNigeria: “The #Buhari-#Osinbajo admin has opened a new vista for growth for Nigerians with the launch of #ECOWAS Trade Promotion Organisations #TPO to increase the volume of trade in the region with Export Expansion Facility Program #EEFP. It‘s #SaveJobsCreateJobs &

It is a N50billion programme financed from the ESP whose implementation is being led by the Vice President, Prof Osinbajo.

@kelvinobambon: “#eefp, this initiative will bring out the best of entrepreneurial spirit in the youths. It‘s a laudable one and should be vigorously pursued.”

There has been confusion on social media over the genuineness of the passport Sunday Adeyemo, popularly known as Sunday Igboho was arrested with in Benin Republic.

This is as his counsel, David Salami, in Benin Republic, reportedly said that the self-acclaimed activist was arrested with Nigerian and German passports.

This is contrary to claims that Igboho was tried for possessing a Beninese passport despite not being a citizen of the country.

However, those who reacted have taken a swipe at Igboho accusing him of committing a criminal offense both in Nigeria and Benin.

They also slammed some Nigerians who have been supporting him out of ignorance.

See their comments below:

@oke_olabode: “So he has two fake passports. After his Nigerian and German passports were seized by DSS.”

@stfditua: “Sunday Adeyemo, a.k.a. Sunday lgboho may face 21 years imprisonment over the Beninese passport he tendered before his aborted trip. The secessionist wanted in Nigeria was said to have presented a fake travelling document to Immigration officials in Benin”. This is the twist.

“For those who have been following my tweet few hours after he was arrested and appeared in court, I told Nigerians that Igboho is facing two cases:

1. Immigration case; use of fake passport.

He is currently answering to the first case.”

“Here is why these corrupt media were reminded NOT to glamourize criminals. I’m sure the Nigerian media would’ve tagged Shekau a Rights Activist too.”

@drdebodun: “#SundayIghoho : The level of dishonesty among many of our so-called public affairs analysts and intellectuals is shocking and exasperating. Why are they now asking for fairness & justice from a government and constitution that Sunday Igboho decided to up arms against?

“In any case, it’s looking like the Beninoise government is going to be the one to jail Igboho for 22 years on purely criminal matters. His supporters can go and face the no-nonsense gendarmes of the Benin Republic.

“Election thuggery is different from the armed struggle for secession.”

People from the Niger Delta have blasted the Indigenous People of Biafra (IPOB) for insulting an elder statesman from the region, who said that the South-South can never be part of Biafra.

Reacting to Chief Edwin Clark’s comment, IPOB reportedly described him as someone whose betrayal runs in his blood.

Piqued by the derogatory statement from the secessionist group, many Nigerians expressed solidarity with Chief Clark, while reaffirming that the South-South will not be a part of Biafra.

Some of the reactions are seen below:

@Limi68169615: “Each time I read the perspective of Igbos about Biafra, with respect to Niger Delta, I wonder if they think insults, undermining other tribes, personalities and people from the region will give them what they want. You’re acting like the Fulanis, only you’re yet to shed blood.”

@KeansoLala: “Every region has a right to self-determination. Is not by force nor by fight.”

@kifanzi_stephen: “Is not Biafra, abi na by force ???? Must everybody join your nonsense, leave him alone.”

@Obongowoibesik1: “He can speak for Niger Delta. You people should give it a rest.”

IPOB also trended following reports that a US bank account belonging to the group has been closed over fraud.