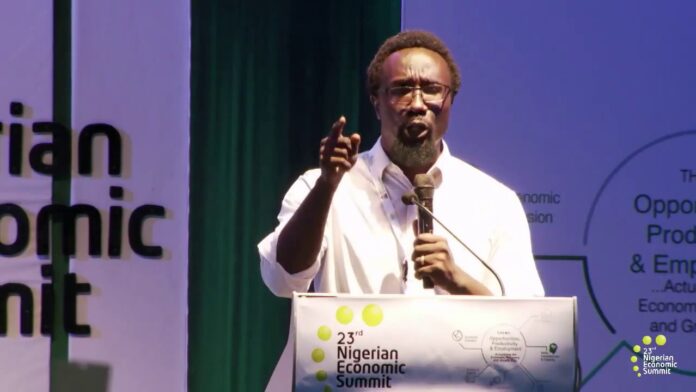 I was not taught about the War in school. I was taught about the War at home. At home, it was not called the Nigerian Civil War. At home, it was called the Biafran War. Because, at home, it was a struggle for liberation. There is a difference. A country can break up because different groups within it are unable to reach a consensus. That is the challenge we face today. In 1967, it was different. In 1967, one group was being systemically targeted and killed in other parts of the country. We call it ‘The Pogrom’. I do not like the word ‘pogrom’. It does not carry the weight it should. In truth, the events of May to September ‘66, in particular, are the closest we have come in this country to Genocide. I tell you, never before, and since, have a people in Nigeria been killed, so openly and on such a scale, for sake of their ethnicity alone. The War was, first and foremost, to escape this Fate.

For, ‘if we must die’ – wrote the Jamaican poet, Claude Mckay – ‘let it not be like hogs’. Let it not be at the hands of street mobs, slitting open the bellies of pregnant women, slaughtering innocent men. No! The trains were rattling into Enugu every day with the stories – the corpses and survivors – of a gruesome killing campaign. No! If we must die, then ‘like men we’ll face the murderous, cowardly pack. Pressed to the wall, dying, but fighting back!’ That poem was pasted on the wall in my father’s office for much of his life. For the War he fought – the Biafran War – was, first and foremost, defiance in the face of an existential threat, a threat unleashed by the events of Jan. 15 1966.

For, in truth, once the sun had fully risen upon that first coup, and all could see what it had done, War loomed. You see? It was not an Igbo coup. That is our eternal defence. And, by this we mean, it was not a coup exclusively planned by Igbo military officers with the objective of overthrowing Northern leadership in favour of Igbo political dominance. This is our eternal defence. And it is true. But, unfortunately, in real politics the intention of a rival is ascertained, not by what he says he meant to do, but by what – in fact – happens. And, there, you will see it – there, in Achebe’s ‘Arrow of God’ – what it means, no matter your intentions, to go into your neighbour’s obi and kill his Ikenga.

For the Sardauna was not just a man. No. To the North, he was hope. He was pride. He was self-belief. He was aspiration. And it was Nzeogwu, a man lionized by Ndigbo, that murdered him. So too Maimalari – Nigeria’s first regular combatant, and, by virtue of this, an inspirational and mythical figure in Northern lore. And it was Ifeajuna, his trusted Brigade Major, the one he flagged down for help, that murdered him. So too Balewa – soft-spoken, living proof that by Western education and hard work a Northerner, born talakawa, could rise – murdered. So too Yakubu Pam – not Hausa, not Muslim, representative of that Ahmadu Bello’s original, multi-ethnic vision of ‘One North’ – murdered. Whether they meant to or not, the plotters of the first coup – like Akukali in Achebe’s story – had broken into the obi of the North, taken the region’s Ikenga in their hands and split in two. And once this became clear – that the victims were mostly men of deep significance to the North, while the plotters were mostly men from the Igbo ethnic group – War loomed. And it would have taken a critical mass of extremely cool heads on every side to prevent it.

But a critical mass of extremely cool heads on every side can be hard to come by in a country that has always been so young. You see? Our body dey hot. And no one, not even Isaac, would willingly carry himself up a mountain at the top of which he believes he is to be sacrificed. Even Jesus, who knew from time what He came here to do, sweated blood first. I tell you, no one, unless they are bound hand and foot, will lie down waiting for you to come and cut their throat. How? It was this fear – of what the pattern of killings in the Jan 15 coup meant – that drove the North to bloody retaliation in July ‘66. It was this fear – of living in a country that would do nothing to stop the wanton killing of Igbos – that drove Ndigbo to secession in May ‘67. It was this fear – of Genocide, of extermination – that kept Ndigbo fighting, through hunger and starvation, stretching a brief ‘police action’ into a 3-year war. For our parents said to themselves, ‘If we surrender, we will be massacred anyway, so – ndi nkem – let us die like heroes’.

For, I tell you, if people believe they have no choice – that they are facing an enemy who will give no quarter and show no mercy – they will fight on. That is why we show mercy. That is why we make concessions. That is why we provide alternatives. That is why, even on the battlefield, we carry love in our hearts. For without it, these types of quarrels will only be settled when one side has exterminated the other. But Genocide – like Cain’s murder of his brother, Abel – is an act this molten earth never forgets, or forgives. And, I tell you, even if one child manages to survive the attempt by one group to eliminate the other, you can be sure that Hate will live again. Yes. It is for this reason that the Good Shepherd teaches us to love our enemies. No. Not because it will bring about the end of wars. But because it will ensure that wars, when they occur, do not bring about the end…of us.

To those who lost their lives in the War, and in the events leading up to it…. May your souls rise like smoke to the heavens. May your names never be forgotten. And out of the memory of an unspeakable tragedy, may we who remain learn the wisdom, the commitment to our shared humanity, to ensure it never happens again. Ozoemena.